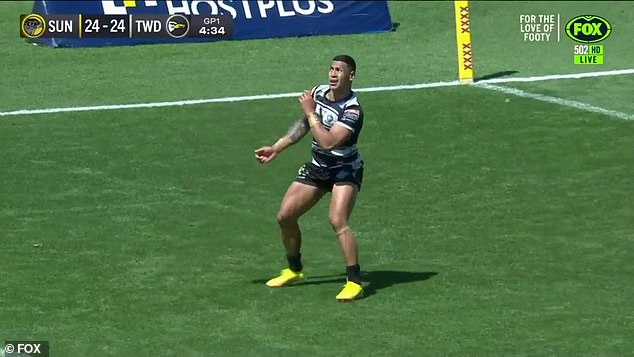 NRL star’s 60 seconds from hell: A series of bungles saw Queensland Cup side spectacularly lose in semi-final despite leading 24-0

Former Brisbane Broncos and Gold Coast Titans NRL star Jamayne Isaako had 60 seconds of football he wishes he could get back in a disastrous end to a Queensland Cup reserves semi-final at the weekend.

The versatile New Zealand international came on late for the Tweed Head Seagulls in their semi-final against Melbourne Storm feeder side Sunshine Coast Falcons.

With their season on the line, the Seagulls raced to a 24-0 lead at Sunshine Coast Stadium.

Not only did Tweed take a 24-0 lead and still blow the bed. Poor Jamayne was caught inside goal by the Golden Point cross and then tried a short dropout that missed 10 meters and gave the Falcons a penalty goal 10 meters straight ahead to win the game… pic.twitter.com/yqqXUYY9R1

Isaako looked at his impressive best in the opening exchanges with a superb pass to test young Titans star Treymain Spry before scoring.

But when the Falcons got back into the contest, disaster struck. The scores were tied 24-all at the final period, forcing the game into overtime.

The Falcons kicked off and Isaako was faced with a raw bomb and the sun in his eyes, eventually missing the catch and seeing the ball roll into contact.

This meant the Seagulls were forced to throw the ball off their own goal line and Isaako looked for redemption but put the ball wide to try and regain possession.

Unfortunately the ball didn’t travel the required 10 metres, giving the Falcons a penalty right in front and handing the Seagulls their heaviest defeat of the season.

“Not only did Tweed lead 24-0 and stay in bed. Poor Jamayne was caught inside goal by the Golden Point cross and then tried a short dropout that didn’t go 10 meters and gave the Falcons a penalty goal 10 meters straight ahead to win the game. ,” footy fan Eden Richards tweeted.

Isaako has been signed by new NRL club Redcliffe Dolphins and will look to cement his place in coach Wayne Bennett’s top 13 during the off-season.

He also hopes to represent New Zealand at the Rugby League World Cup, although he also has the option of playing for Samoa, in the second division.