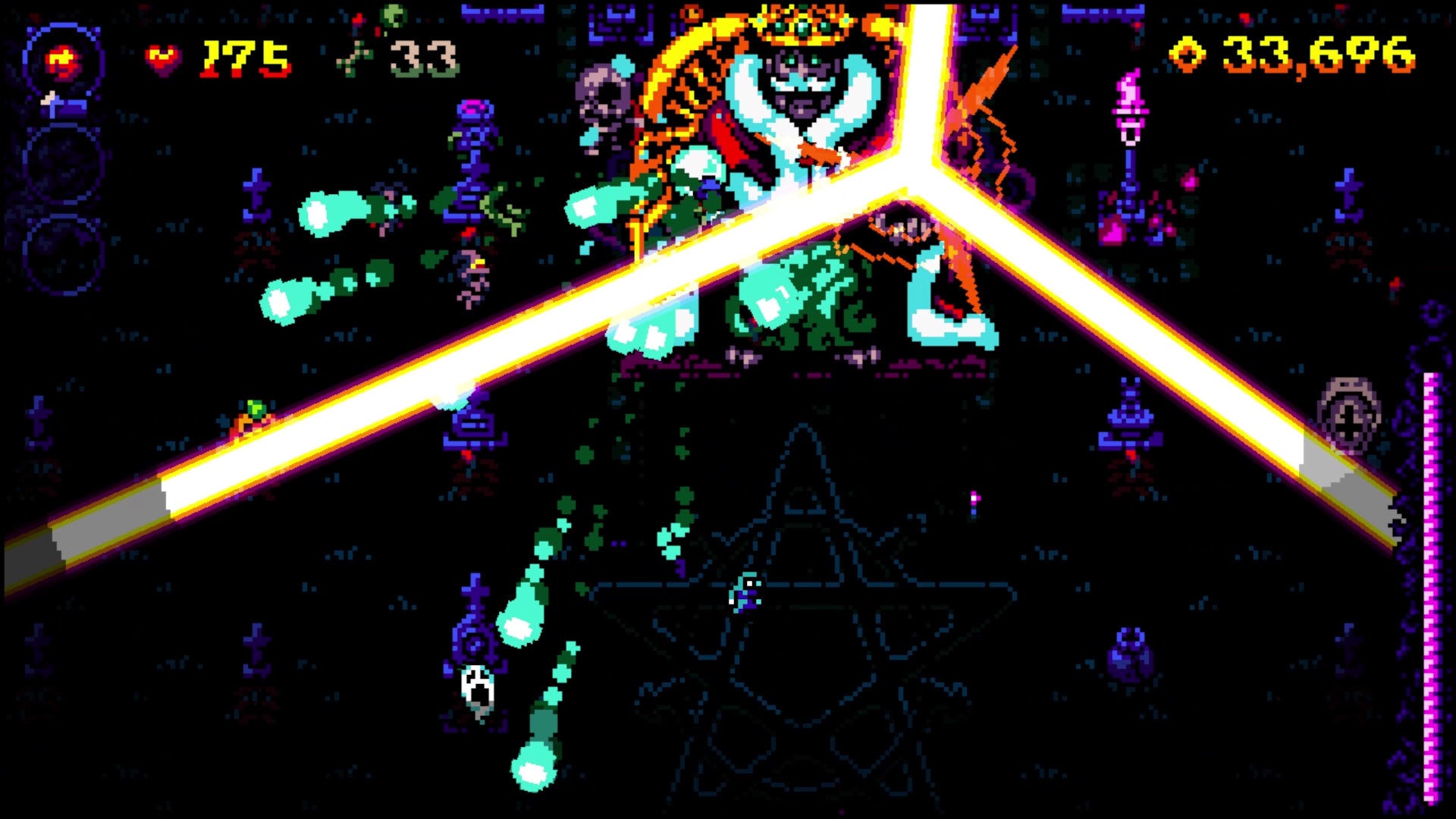 Halfway through Cult of the Lamb I found myself engaging in a neat little dice combat game. It was a mini-game, I suppose, but it was so beautifully handled, so rich in strategy and the proposition of depth, that I felt it could well have been created as a game in its own right. Call it Gwent Impulse: within this perfectly good game, there’s a smaller, also very good game that seems to be included out of sheer generosity.

Since then I’ve been very lucky when it comes to Gwent Impulse. Is this a trend? I hope so.

When I say very lucky, I mean I played two games over the weekend and both turned out to have sub games in them. The first is Boneraiser Minions, a disturbingly exciting self-combatant in the style of Vampire Survivors. You move around an arena summoning mobs that fight a horde of enemies for you. Everything gets wilder and wilder as you unlock new mobs, new spells and all that jazz. Eventually the screen fills with action and you can barely keep track of it. Gorgeous!

And yet I discovered in a side menu a little game called Clashful Cards. Clashful Cards uses cards that you unlock in the main mode. It’s a two-player affair, you versus the CPU, and you both take turns dropping a selection of cards onto a game grid. Each card has a number on it and an attack direction (or multiple directions). If the number is greater than the number of the enemy card in the attack direction, you flip it over and it is yours. If the enemy’s number is higher, he will flip the card over to you. The winner is the person with the most cards on the board at the end of a hand.

It’s wonderfully elegant stuff, and I love watching the way ownership ripples across the board as a new card drops, changing everything. It’s all about having the best cards, sure, but there’s the deal to deal with, and since the cards are earned in the main mode, it’s even more of an excuse to go and play a standard game of Boneraiser Minions for few minutes and then come back with your winnings. Great stuff, regular and generous.

Just as I was beaming with happiness about it, I came across Tableturf in Splatoon 3. Cor, Splatoon 3 is exciting. It’s the game I already knew, but now it’s packed with stuff – new weapons, a new campaign, and that funny little tactical card game.

Tableturf is a genius. It works much like the main game, as your goal is to cover as much area with ink as possible while your opponent does the same. The difference is that instead of a 3D arena, you battle it out on a grid and drop ink by choosing cards with specific ink formations. Both you and your opponent play at the same time, and if you both claim the same territory, the card with the lowest number wins. It’s a series of blind hands that lead to general map dominance. I can’t get enough of it.

There are clever tweaks to the formula, such as special squares you can capture to earn points that allow you to perform special moves. And yes, you can buy or earn new packs of cards so your options are always expanding – making a new deck in Tableturf is surprisingly worry-free.

But what I really love is how simple tactics make so much sense. You can only place a card if it connects to a card you already have on the board, so for the first few turns the goal is really to advance towards your opponent as far as you can and cut off as much of their potential territory as possible. At times, it almost reminds me of Go, a game that Nintendo has a decent history with in its own right.

What I really love, though, is that I didn’t buy Tableturf. I bought Splatoon 3. Like I didn’t buy Clashful Cards or that Cult of the Lamb dice game. It’s Gwent Impulse. Isn’t that brilliant? I hope it continues.