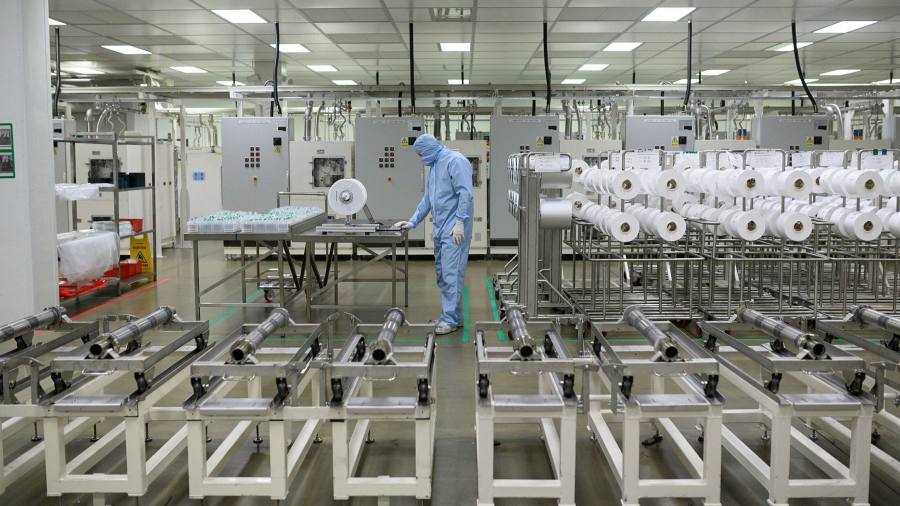 Dozens of countries, from the UK to France and Norway, plan to phase out the sale of motor cars by 2040 or earlier.

There is “just this huge gap between those who can afford an electric car and those who can’t,” said Meryem Brassington of Lloyds Banking Group, the UK’s biggest car lender.

This is not only due to the expensive battery technology, but also the reluctance of banks to make leasing arrangements cheaper.

These deals dominate the market. In the UK, nine out of 10 new cars are bought with a lease or similar arrangement.

Before financiers determine what to charge motorists on a lease agreement, they must calculate a car’s residual value — the projected value of the vehicle in three or four years when the agreement expires.

This is because there is little data to rely on, unlike with internal combustion engine vehicles, where dealers use mileage and service history in a well-established market to give a car a future used value.

This system meant that, rather than paying in full, most buyers of internal combustion engine cars in Europe bought them using credit through a deal based on their expected depreciation.

For example, if a £35,000 car loses £12,000 in value over three years, the buyer only needs to finance that £12,000 rather than the full cost of the vehicle. This means that a car that depreciates less has a higher residual value and a lower monthly lease payment.

The trend has been key to the growth of premium brands like BMW and Mercedes, whose vehicles are becoming more affordable because they hold their value better than mass-market nameplates.

Therefore, reducing the amount of depreciation of electric vehicles is crucial to make the mostly expensive battery cars more affordable for consumers.

At the center of the equation is the battery.

“Remember that the battery is the biggest asset in improving the residual value of the car,” said Ashwani Gupta, Nissan’s chief operating officer.

“When we look at the customers who drive [the electric] Leaf since 2010, and when we check the condition of the battery, even after years, we have a range between 85 percent and 90 percent,” he told the Financial Times’ Future of the Car Summit in May.

A major advantage of electric vehicles that helps them maintain their value is fewer moving parts and thus lower maintenance costs.

Rental group Hertz, which recently began including electric models from Tesla and Polestar in its fleet, said last month that maintenance costs on cars are about 50-60 percent of what it spends on motor cars, with “slightly higher’ costs for extra tires because vehicles tend to be heavier.

The big question is why the growing awareness of battery longevity doesn’t immediately translate into lower lease prices for electric vehicles, which remain stubbornly expensive.

The main reason for this is the reluctance of the banks behind these amortization agreements to reduce costs. With little data to calculate future electric car prices or residual values, they resisted falling lease rates.

“I could share data on hundreds of thousands of petrol and diesel cars, but we have a much smaller sample size for electric cars,” he said.

However, sample sizes are increasing as the first in the next generation of electric vehicles, such as VW’s ID.3 launched in 2019, begin to be sold on the used market, allowing financiers to gauge the health of their batteries.

“The prices that [the ID.3s] The recovery is encouraging and moving towards a recovery in residual prices today,” he said.

However, one factor that could lead to a greater depreciation of electric vehicles, Todd added, is continued advances in battery technology, which means older models may prove harder to sell.

“If you take a gasoline vehicle today that is sold new, the technology in three years will not be that different from today’s gasoline vehicle,” he said, adding that in three years, the improved range or performance in a new electric car may make older models look less attractive by comparison.

Ultimately, it will take time—Todd estimates three to four years—to gather enough data to convince financiers to make the leap and increase the residual values ​​of electric vehicles, which in turn will lower lease rates. .

“Then we’ll have enough insight to be sure of it [residual value] regulation,” he said.

Many of these auto-owned “captive finance” companies, such as VW Financial Service or Ford Credit, are also big profit drivers for their parent companies. VW’s arm made a profit of 3 billion euros in the first half of this year, while Ford posted a profit of $1.7 billion.

This has led some in the industry to argue that lenders have at least some incentive not to push the electric vehicle shift, which will result in smaller short-term profits, sooner than necessary.

This has given rise to a new wave of smaller electric-only rental companies aiming to exploit what they see as a gap in the market.

“The market is still relatively conservative [second-hand values]” argued Fiona Howarth, managing director of Octopus EV, an electric car leasing arm of Octopus Energy that operates in the UK and US.

“But they don’t feel comfortable taking that step. If you were willing to be braver and set the balances sharply, then that would lower the monthly price.”

As well as lower maintenance bills, the ironclad rules of supply and demand will also boost residual values ​​for used cars, Howarth predicts.

“There were 200,000 new electric cars in the UK last year, they won’t hit the used market three years ago,” he said. By then, the number of people looking for used EVs will be so high that the available cars “won’t even touch the side” of the level of demand, he added.

Last month alone, there were more than 5 million views on AutoTrader of used electric car ads, according to the online marketplace.

While better-value electric vehicles may be good news for new buyers reaping the benefits of lower monthly payments, it means the cars will be more expensive when they enter the used market.

This is likely to push second-hand buyers, who primarily use cash or bank loans rather than amortization-based finance deals, into leasing.

“We’re seeing significant growth in used car financing,” said Todd at VW Financial Services. He estimates that about half of the used cars sold by VW are financed, up from 35 percent “a few years ago.”

In addition, the used value of the vehicles, the factor that will determine how much used buyers pay in a monthly lease, is much less certain. The pool of data for cars over six years old is even shallower.

“We’re not sure what this is going to be worth when it’s five or six years old,” Todd said, “so the idea of ​​hedging the residual value risk could also be a factor.”

Many manufacturers, knowing this, now offer a warranty on the battery that lasts eight years.

But consumers still want certainty – and are willing to pay for it.

In one example, U.S. consumers paid $2,000 more for an electric vehicle with a battery health certificate than one without, said Patrick Cresswell, managing director of consultancy Future Motion.

He added: “One of the key pillars is to make used EVs an attractive thing that people can buy with confidence.”