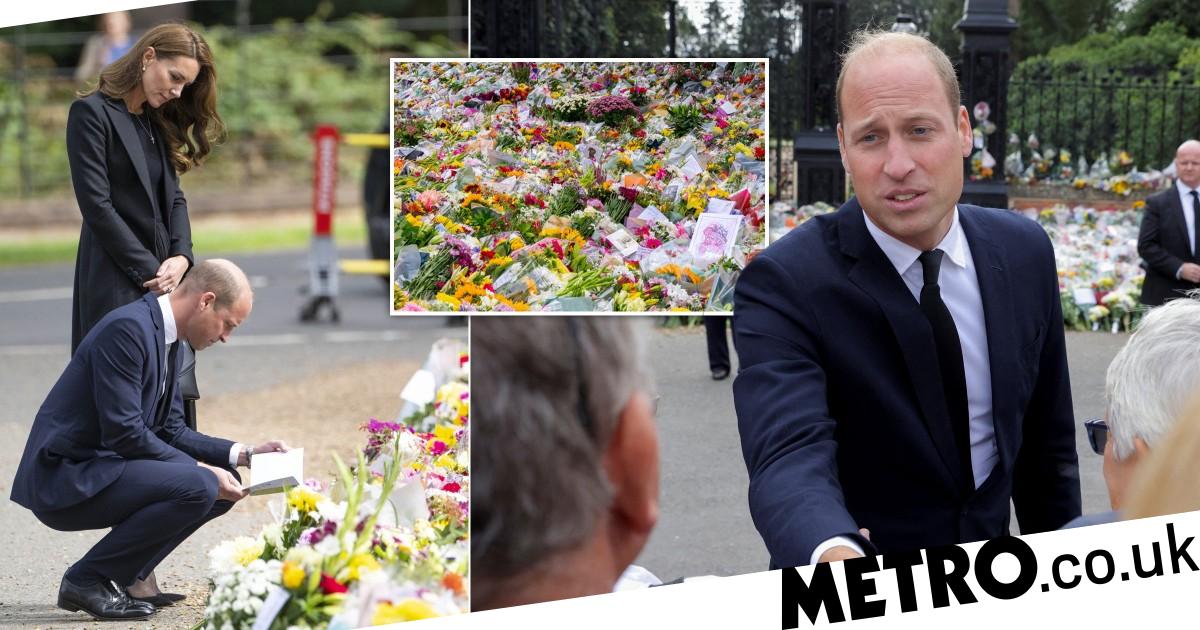 The Prince and Princess of Wales stood together in solemn silence and held back tears during their visit to Sandringham.

Prince William was heard telling a woman yesterday: “Don’t cry, you’re going to get me started” as he comforted many of the mourners and described the Queen as “everyone’s grandmother”.

He also revealed how walking behind the Queen’s procession brought back memories of Princess Diana.

William and Kate took time to read messages and view the floral tributes from Norfolk Gate.

He told one woman how the procession of the Queen’s coffin from Buckingham Palace to Westminster Hall was “very difficult”.

News of the visit from the Duke and Duchess of Cambridge and Cornwall meant thousands of people went to see them.

Norfolk Police advised on Thursday that an “increasing number” of people were expected and officers were operating a one-way system around the estate.

Many were delighted to see the couple in Norfolk.

Caroline Barwick-Walters, 66 and from Neath in Wales, said: “He told us how difficult it was yesterday, how it brought back memories of walking behind his mother’s coffin.”

Receptionist Jane Wells, 54 and from Long Sutton in Lincolnshire, said: “I said how proud his mother would be of him and he said how difficult it was yesterday because it brought back memories of his mother’s funeral.”

Peggy Butcher, 89, a retired dry cleaner from March in Cambridgeshire, said: “She seemed to care about us because we cared about the Queen.”

She said she told William: “Thank you for sharing your grief with the nation,” to which he replied “she was everyone’s grandmother.”

Meanwhile, entry to the queue to see the Queen has been closed for at least six hours.

The queue has now reached full capacity – stretching back right to the end of the route at Southwark Park.

When mourners can rejoin the queue, the estimated waiting time is now 14 hours.