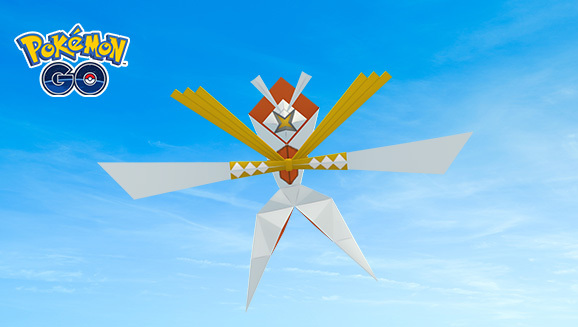 Kartana has made a surprise appearance at Pokemon Go Gyms near you for a limited appearance in five-star raid battles. This Ultra Beast appeared in the Northern Hemisphere without an announcement from Niantic on September 13th. The main series counterpart, Celesteela, takes its place in five-star raids in the Southern Hemisphere. This is the first time Kartana has been available in Pokemon Go, so players old and new can look forward to adding a new entry to their Alola Pokedexes.

Kartana appears as the only five-star boss in the northern hemisphere from 10 AM. local time on September 13, 2022 and will remain available to challenge in raids until the same time on September 27. Raids don’t generally follow a set schedule, and Kartana raids will appear randomly in Gyms around the world during this time period, but you’ll get a notification from the game when a nearby raid is about to start. You’ll be able to easily identify a Kartana raid about to launch with the Ultra Wormhole taking the place of the usual raid egg at the top of the gym.

Your best chance of finding a Kartana raid (or several of them!) is during the two Raid Hours in which the Drawn Sword Pokemon will appear. Every Wednesday from 6 p.m. until 7 p.m. local time, the majority of Gyms host five-star raids for trainers to work together to take down. The two Raid Hours that will take place during Kartana’s stay in five-star raids will be on September 14th and 21st. If you live in the Northern Hemisphere, you’ll need your free Daily Raid Pass or a Premium Battle Pass to join a raid in person , or a Remote Raid Pass to join a raid remotely. If you’re in the southern hemisphere, there won’t be any Kartana raids appearing near you to join in person, so you’ll have no choice but to use a Remote Raid Pass.

Can I get a shiny Kartana?

As with most Legendary Pokemon appearances in Pokemon Go, Kartana’s shiny form has yet to be released. If you want to get a shiny, you’ll have to wait until a future return to raids. For now, you can raid the Kartana to stock up on Candy and Candy XL to power up any Kartana you want to use in the future.

Don’t Fear Shadows: Shadow Pokemon deal 20% more damage than their non-shadow counterparts, so shadow versions of any of the recommended Pokemon that have them can help you win.

Is it worth raiding Kartana after getting the new Pokedex entry? Kartana has the highest DPS of all the Grass-type raid attackers currently out, surpassing even Mega Venusaur and all current Grass-type shadow Pokemon. The only Pokemon that looks like it will beat it in the future is Mega Sceptile, but there’s no telling when that will be released. Kartana is definitely worth adding to your raid team for future Ground, Rock and Water type raid bosses.

The story is very different in PvP. Kartana is currently impossible to get below 1500 CP for use in Great League. In the Ultra League, he doesn’t have the volume to compete. And while Kartana can reach over 4200 CP when fully fleshed out, on par with other Master League contenders, its current moveset doesn’t allow it to perform very well there either. If you were to get a move update in the future and get moves like Psycho Cut or Sacred Sword, that could change things, but for now it’s probably not worth making a Kartana for any level of PvP.