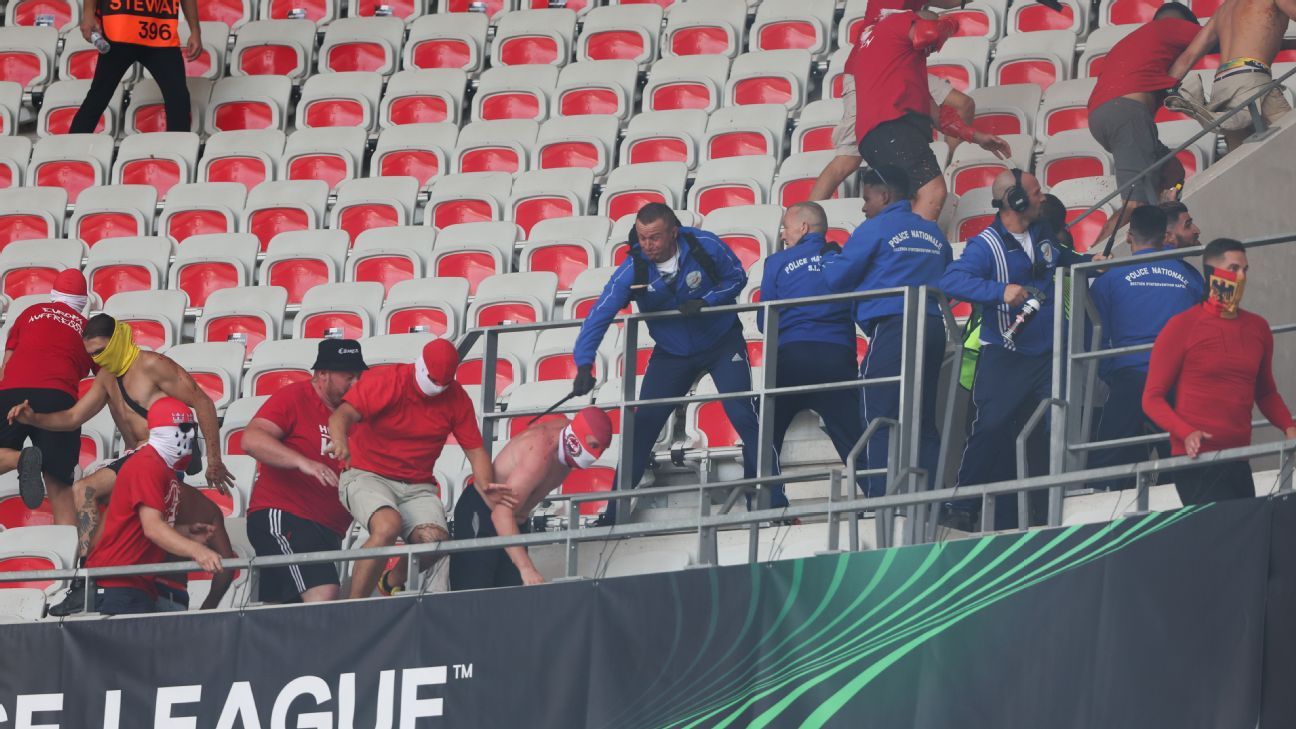 The Europa Conference League match between Nice and Cologne started almost an hour late after a crowd riot broke out in the stands at the Allianz Riviera stadium in southern France and left one in intensive care on Thursday.

UEFA said the match was “delayed due to crowd disruption”, later adding that it would kick off at 19:40 local time (17:40 GMT) after television footage showed supporters of the German team heading towards the home fans and throwing flares. .

Police intervened, but the players had not started warming up shortly before the scheduled kick-off at 6.45pm local time.

Local authorities said a male Paris Saint-Germain fan was in critical care with head and chest injuries after falling from a platform and 17 others were injured.

“OGC Nice condemns in the strongest terms the incidents that took place before the match, which started with damage in the city, followed by the forced entry of dozens of hooligans from the area reserved for Cologne fans to the presidential stand,” the club said in a statement.

“Stunned by this outbreak of violence, although they had done everything possible to welcome FC Cologne fans in the best possible conditions, OGC Nice expresses its sorrow for the Nice crowd, who witnessed and were victims of these incidents and had to wait almost 45 minutes before they were allowed to enter their pitch before kick-off.

The German club said it “condemns any form of violence in the strongest possible terms. We support a sporting, fair and respectful behavior between them. We apologize to all the peaceful fans who have made this a football festival so far.”

French Sports Minister Amelie Oudea-Castera said: “I am fed up. I am really fed up that our sport is being polluted in this way, that we can no longer say that we will go to a stadium with our children in a peaceful and safe way” .

“We really want to play the game with you. We also want this game to happen. But we have to say we don’t like to see this,” he said.

“We worked hard last year and in the playoffs. And we would love to do that with you and we ask that you keep your cool and support us as much as possible.”

The match was finally played and ended in a 1-1 draw.