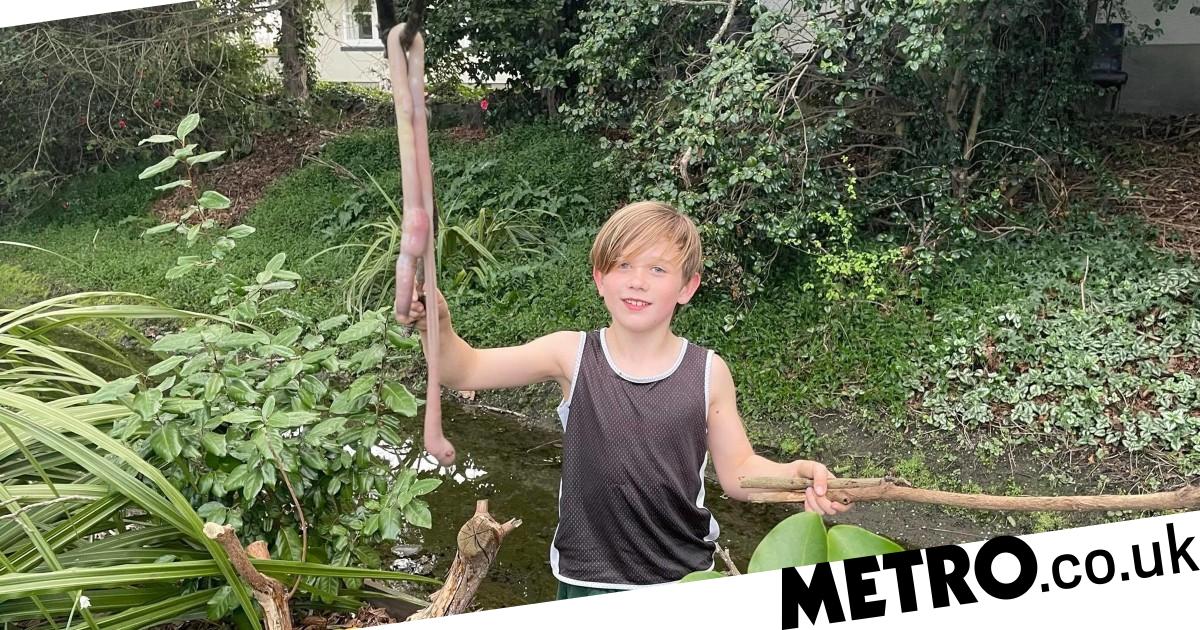 If you’re not a fan of creepy crawlies, look away now.

This worm, discovered by a nine-year-old boy in his back garden, is longer than many small children.

New Zealander Barnaby Domigan wanted to keep the three-foot-long earthworm, but his parents had other ideas.

Barnaby was photographed with the animal by his father Chris after he found it in a stream outside the family’s Christchurch home.

It is about the same length as a four-year-old human.

Mum Jo explained: “(Barnaby) was amazed and shocked that a worm could be that big and was very excited.

“Barnaby used to play in our yard with his brothers – Frankie, Pearl, Abraham and Remy.

“He was exploring the water to see if there was anything interesting in there and when he found the giant worm he used a stick to pull it out.”

She explained: “We didn’t measure it, but he thinks it was as long as both of his hands, so we imagine it was about a meter long.

“He called my husband to quickly take the picture.”

Barnaby, who has become a Kiwi sensation through subsequent media appearances, wanted to keep his unusual discovery – but his parents were less keen on the would-be pet.

“So he put it back at the water’s edge where he found it,” laughed Mrs Domigan, 40.

“Then I put a picture on Facebook that night and the next day when we found out how interested everyone was, we went back to find her but she was gone, she was supposed to be gone far away.”

Barnaby told ThreeNow: “I was shocked because I wasn’t sure if it was a worm, a snake, an eel or who knows what.

“I really, really wish I still had the worm, like really, because it would be so interesting to hold because then I could show other people and they could just marvel at how big it was.”

There are believed to be several species of worms in New Zealand capable of growing over 30cm in length.

The largest, the North Auckland worm (Spenceriella gigantean), is said to be able to grow to over a meter in length.

John Marris, curator of the entomology research collection at the University of Lincoln in New Zealand, said they were usually found in undisturbed areas such as forests.

But it was rare to find them in a home garden, he told Wellington-based website Stuff.

He added: “There are some very large native earthworms known – a meter is not beyond reason.”

Mum Jo said of her son: “He thinks it’s great.

“He has really enjoyed all the radio and TV interviews and is very excited about how interesting the whole world has become.

“We are so happy that a child exploring nature has become a global story! And he feels very, very grateful that he was the person who found this amazing worm.”

MORE: New Zealand ‘has no plans to become a democracy after Queen dies’