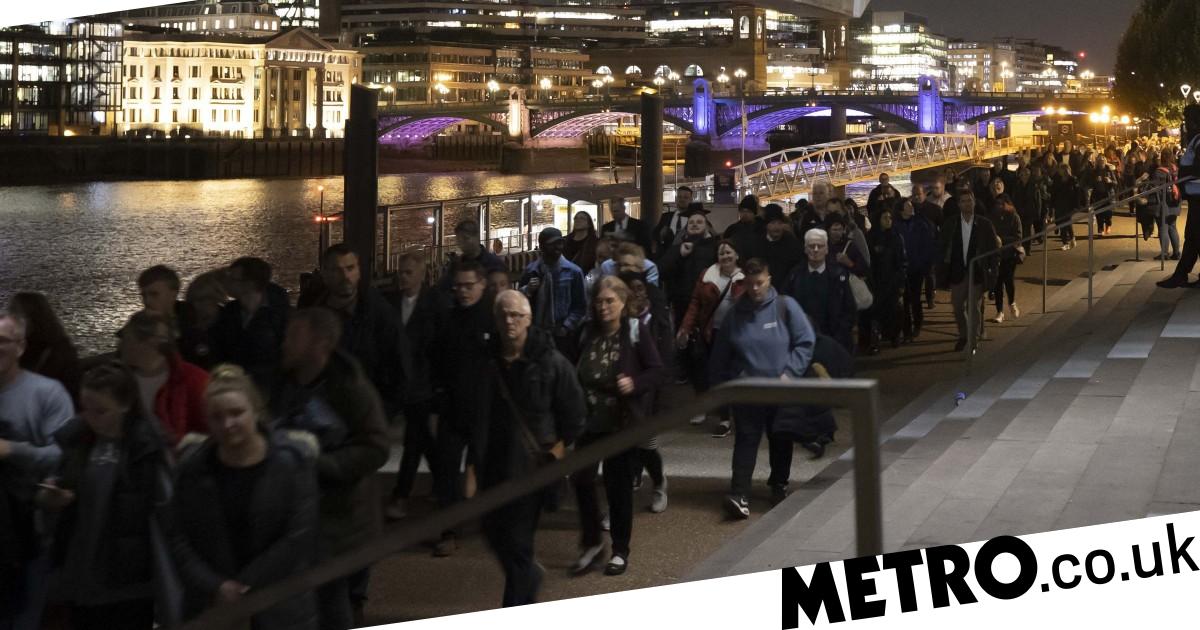 The wait to get into Queen Elizabeth II’s coffin is now more than 11 hours and the queue stretches at least 4.4 miles – but many say it’s worth it.

Before Her Majesty is laid to rest during her state funeral on Monday, September 19, Westminster Hall is open 24 hours a day for people to pay their last respects.

Three days left to see the monarch laid to rest at the historic landmark’s doors close to the public at 6.30am on Monday.

The prospect of showers later today also does not seem to have deterred people arriving from all corners of the country.

Nurse Melanie Pickman, 50, left her home in Swansea at 11am to join the back of the line just before 3pm yesterday.

The mum-of-three said: “My sons think I’m crazy for coming to London to stand in a queue that some people say can be 30 hours long.

“Last night I thought about it and made the decision to come first this morning. I just thought I should come.

“We will never see this again. He served our country for such a long time. We owe it to her to show our respect.

“Look at all those people who turned up in line – it made them happy.

“She may be the queen, but she’s also someone’s mum, aunt and grandmother. I just think she’s a part of us too. We were lucky to have her.”

The waiting time had jumped to 14 hours in the early hours of today, although the mileage remained the same.

Firefighters were seen handing out bottles of water, while volunteers from St John Ambulance were also at the scene.

At least 400 people in the queue had to be hospitalised, with more than half of that number on Wednesday.

While a small number of patients developed serious conditions, the most common complaints were blisters, dehydration and feeling faint.

But for most, queuing to see the Queen’s coffin was a “rewarding” experience.

Marc Carney finally entered Westminster Hall at 6.40pm. after traveling from his home in Hythe, Kent on Thursday morning.

The moment he got to say his personal goodbye left him “struck by the realism” of all that is happening.

“You are struck by how touched we all are and how much love and support there is for the Queen,” the 58-year-old said.

Mr Carney joined the queue at about 11.30am. and said “it was hard to find the end of it because the line kept getting longer as I walked towards it.”

He added: “It was so rewarding and peaceful in so many ways. You also need to see London under a different cloud.

“It was worth it to make this long trip. It makes you focus on what you’re here for.’

Although temperatures were mild, in the early 20s, mourners mostly arrived prepared, with warm blankets and raincoats in hand.

As they passed landmarks including Shakespeare’s Globe Theatre, there was plenty of good-natured chatter and discussion about the Queen’s 70-year reign.

Amy Harris, 34, and Matthew Edwards, 35, met James Cross, 65, after taking the train to London from Birmingham to join the queue at around 01:00.

Mr Cross said: “Everyone in the queue was very friendly, chatting and laughing. It was really quite wonderful.’

Mr Edwards said everyone offered biscuits and drinks, adding that the three now intended to have a pint together after a long wait.

Meanwhile, Ms Harris said the atmosphere at Westminster Hall was “breathtaking”, adding: “When you can walk in and have a moment to look at it and think, the serenity of it – to be able to deliver the respect you in such a way a peaceful place, it is very peaceful.’