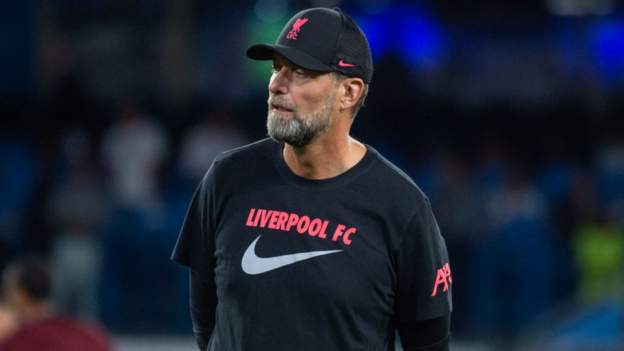 Jurgen Klopp is confident Liverpool fans will observe a minute’s silence for Queen Elizabeth II ahead of Tuesday’s Champions League clash with Ajax.

Boris Johnson, prime minister at the time, condemned those who booed.

Klopp said the minute’s silence was “the right thing” and added: “I don’t think our people need any advice from me to show respect.”

Liverpool have asked UEFA to be allowed to mark the Queen’s death with a minute’s silence before the game against Ajax.

Manager Klopp said the respect the fans point to Cristiano Ronaldo when they hosted Manchester United last season – following the death of the striker’s son – proved there should be no concerns about their behaviour.

“There are many examples where people have shown just the right amount of respect,” he added.

“What surprised me, and I was really proud of that moment, was last season when we played Manchester United in a very sad situation with Cristiano Ronaldo’s family.

Klopp’s mother – named Elizabeth – died aged 81 in February last year but was unable to attend the funeral in person due to Covid travel restrictions in place at the time.

He said he understood the sadness people were feeling and added: “I’m 55 years old and she’s the only Queen of England I’ve ever known. I don’t know her but what you can see she was very warm, nice – dear lady and that’s all that i need to know.

“Because of my personal experience a while ago… Obviously it’s not about what I think, but what the people who are much closer to her felt and I have a lot of respect for their grief, and for that I will show the respect me tomorrow night with a minute’s silence if it passes.”

“The game against Napoli was the worst since I came here”

Liverpool were beaten 4-1 by Napoli in their Champions League Group A opener last Wednesday in what Klopp said was the worst game the team had played since taking charge in 2015.

He described as many as nine of his starting XI for the game as playing below their potential and said they had used the days off to analyze and train for the Ajax game.

Klopp said: “We had a meeting with the players, I watched it [Napoli] game and it was a real horror to be honest. It was the worst game we’ve played since I’ve been here.

“How do you get confidence in football? It all starts with defending the ball, and that’s what we have to do. If we can get momentum, then we can play football.”

It has been six days since Liverpool last played, with all Premier League fixtures at the weekend postponed following the death of Queen Elizabeth II.

Asked if the break could affect Liverpool’s tempo, Klopp added: “Did you see our game? [against Napoli]? If we could lose that rhythm, it would be really nice.”

In the meantime. Liverpool will be without defender Andrew Robertson until after the international break due to a knee injury.