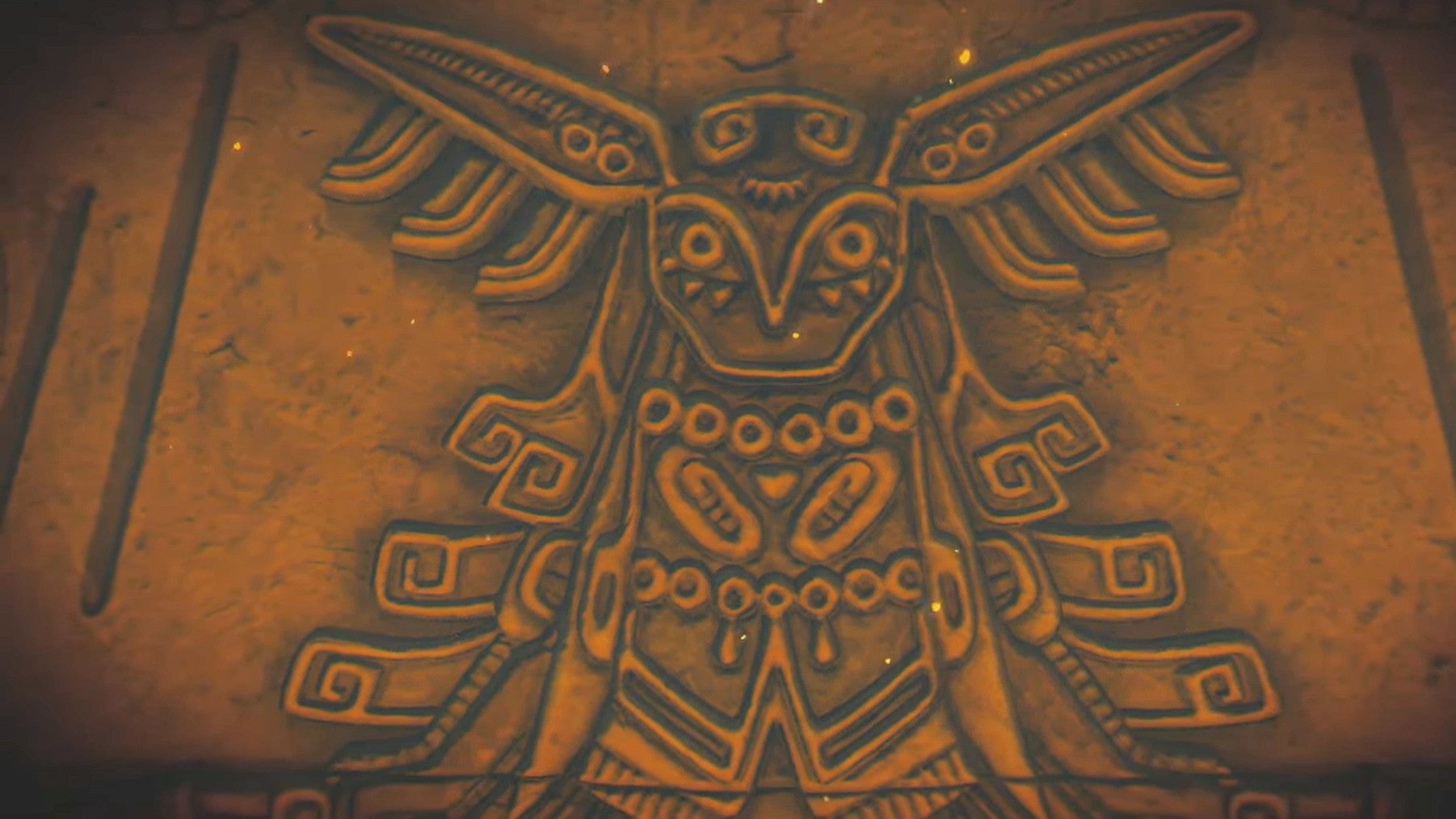 Yesterday, we were all treated to a new trailer announcing the name for Nintendo’s upcoming Legend of Zelda sequel.

Along with finally revealing its name – Tears of the Kingdom – we also got some new footage. And where there’s new footage, you can be sure that Eurogamer’s Ed Nightingale and I won’t be far behind with our theories about what it all means for the next installment in the Zelda series.

So we’ve teamed up to bring you our thoughts on this new trailer below – and discuss the little things you might have missed on a first pass. Without further ado, let’s get stuck in.

Victoria: Hi Ed, my Zelda-nerd friend. Ready to talk about all the reasons why The Legend of Zelda Hy-Rates and help break down this new teaser for the Breath of the Wild sequel?

Ed: I’m not sure I’ll ever be ready, but let’s go skydiving. What did you make of yesterday’s trailer?

Victoria: First of all, the “skydive in” just made me laugh! Second, I think this trailer actually tells us a lot more than meets the eye. These carvings / murals at first seem to tell a good bit of possible history.

The ethereal, long-eared figure surrounded by symbols (perhaps representing the sages) reminded me of the horse-like creature you can meet on the hill in Breath of the Wild, but I can’t remember its name… the one who meets up with all the Bluepies.

Also, the army of moblins and bokoblins lead the charge over what looks like an evil carving. Something big clearly went down – did you notice the soldiers in evil clearly dead? I wonder if they are members of the mysterious Zonai clan.

Ed: The Lord of the Mountain! (RIP Iwata.) Yeah, I think the carvings are very important here. I like that it references similar carvings for Breath of the Wild that told the story. But I think the figure with the long ears is the key. I’m not sure who they are. Holding hands with the other figure, possibly Zelda, suggests she could be the goddess Hylia? Or a new character?

Either way they are surrounded by seven objects, most likely the tears of the title. And whenever there are seven of something, we know what that means: dungeons!

Victoria: This is the dude, thanks! I assumed that this mysterious figure is the character whose hand holds Ganon in place in the depths of Hyrule.

And seven dungeons! I hadn’t thought of that, but now I feel stupid because of course! I also wondered if this female figure is Zelda, or at least an earlier incarnation of Zelda. The princess, in the first trailer we saw for this sequel, had her hair cut, which makes me think there will be some time travel of some description here. I also think it’s because of what Link (or… Plural Link?!) is wearing in the trailer, but I’ll get to that later – there’s so much to say!

I’m guessing the figure we see falling from the sky is Ganon from the first trailer – the way the body is positioned in the carving looks the same way it was in those mysterious caves in the first apocalypse. Want to see more dungeons this time?

Ed: I definitely want to see more dungeons. It was the only thing I missed from Breath of the Wild – Puzzles! Bosses! Iconic locations! – so I’d love to see a return to that Zelda classic but in a fully open world context. I’d also like to see playable Zelda and this incarnation of her is so beloved that now is the right time to do so. I still hope it can happen, even though we haven’t seen it. I’ve also seen rumors that the long-haired blonde character could be a reincarnation of Ganondorf, which is absolutely wild to me.

Victoria: I’m also hopeful for a playable Zelda – I have a theory that we can play as her using her scientific knowledge to solve puzzles in the caves below Hyrule (the ones she fell into in the first trailer) to get back to the surface, but that is probably a discussion for another day.

Ed: What do you do about those little green containers on Link’s hip? They seem to be very prominent in the artwork and gameplay.

Victoria:I had to go back and watch this piece in slow motion as my mind assumed it was the Sheikah Slate on the first watch, but boy was I wrong!

I wonder if they’ll tie in (unwittingly betting) with Link’s various rune-like abilities since he no longer has the slate. Maybe it’s a physical representation of his “magic meter” like we’ve seen in other games?

The vials also add to my time travel theory. The first link we see is with his outfit which looks a lot like Breath of the Wild’s look, with his right arm. However, there is another character model for Link, the one we’ve seen in previous trailers, where he’s dressed in a more “primal” style… and I couldn’t see those vials (unless they were hidden behind his axe- like a weapon, which also has an archaic design). What do you think;

Ed: Judging by the color scheme, I think these vials/containers are almost certainly related to his new abilities. I love the idea of ​​the reverse stasis-reverse time ability, especially as a way to get to the sky. I hope it will be used in some interesting puzzles.

And there are definitely a lot of links going on. Is this real time travel? Are they different characters? Are these flashback sequences or more flashbacks? I can’t wait to find out.

Victoria: I wonder if this Stasis-rock-stairway-to-heaven condition will be specific to certain types of rock in Hyrule. The design of the one seen in the trailer looked like it fell from one of those sky islands, it was too angular to be just a random boulder.

Ed: What do you think about the bird glider? What happened to Loftwings? Or paragliding?

Victoria: Do you really want to know where my crazy brain went?! Okay, I’m 100 percent sure of that not what happened, but the Star Wars fan in me said “Huh, I wonder if that glider is a Loftwing frozen in some kind of Hylian carbonite, like Han Solo in The Empire Strikes Back.” What did you think? Also, did you spot that dragon?

Ed: I wonder if it is summonable, or even if it is the only one? Perhaps there are many gliders soaring through the skies to land, or is it just one but its path can be mapped? I’m afraid I might lose the freedom that paragliding offers. Nintendo said in a press release that “the latest entry in the Legend of Zelda series will take you to the skies and an expanded world beyond,” so I’m very interested to see exactly where we end up.

And yes, that dragon in the distance – it’s clearly a major motif here. This brings us to the logo and the name: do you like it?

Victoria: Dragons are definitely important to this game, we could also see them adorning the doors of the temple (?) that we first saw Link exiting after the mural shots. They have a certain Zonai look.

In our words, we both agree that it is “tears” as in tears and not “tears” as in a tear, because I have seen some people disagree with the latter…

Ed: To quote a meme: why not both? I hope Link collects tears in dungeons. The kingdom may weep after a tragedy, but it is also broken. It doesn’t have a ring to me yet, but I’m sure it will with time.

In summary, how excited are you to play Tears of the Kingdom?

Victoria: Didn’t shed tears in Skyward Sword? Let me check it out. Yes, he was in the Holy Kingdoms. Well, Victoria, it’s almost like the series is connected! Also, the Sheikah’s symbol is an eye with a tear, so I wonder if there will be something to explain that.

In closing, I am incredibly excited for this Zelda release! I love this series and credit it as one of the main franchises that made me fall in love with gaming. However, I’m still a little worried about the similarities between the trailers so far and Skyward Sword, which is one of the lesser Zelda entries in my opinion. I was more excited than the first tease which gave off Majora’s Mask vibes and I hope the energy is still there.

Also, evil on Death Mountain! I feel like this version of Hyrule literally swells up and over with Ganon’s pressure. What about you?

Ed: Well, with all that nastiness, I’m still hopeful for a twisted, scarier vision under the utopia of the sky. I have incredibly high hopes for Tears of the Kingdom, which this conversation does nothing to dissuade. If anything, it made me want to play Breath of the Wild again. Excuse me while I grab my switch.