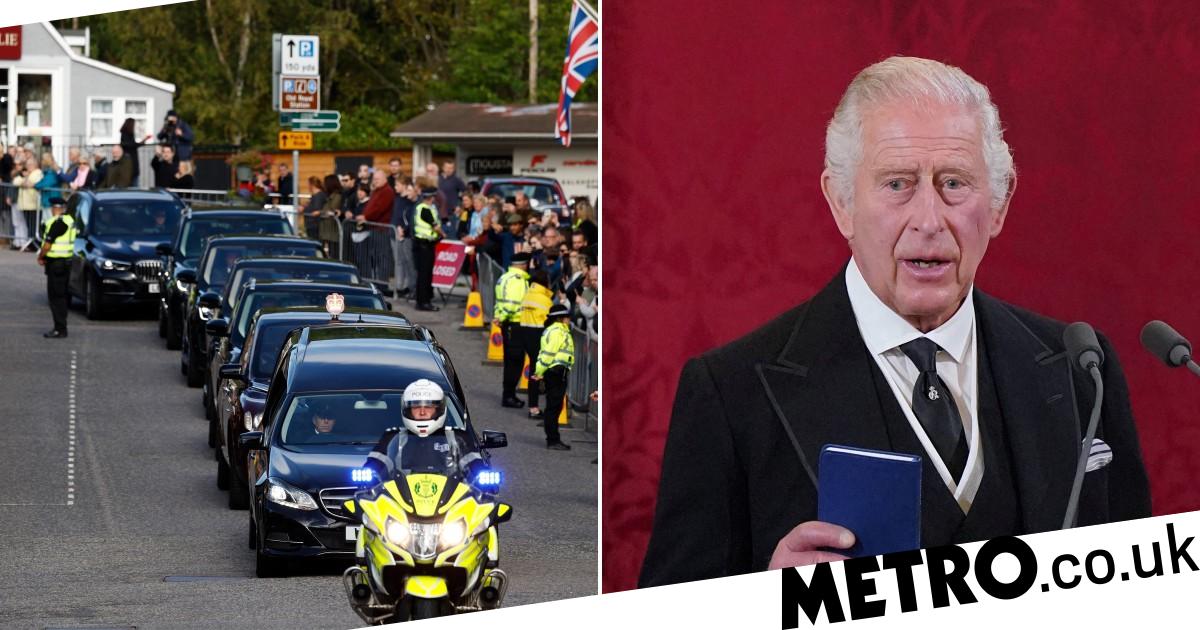 New King Charles III is expected to lead the Royals on foot in a procession behind his late mother’s coffin today.

The body of Queen Elizabeth II will travel to an Edinburgh cathedral to allow the public to pay their respects.

Her coffin will be taken from the Palace of Holyroodhouse to nearby St Giles Cathedral, where her family and a congregation of Scottish dignitaries will attend a service of thanksgiving.

She will be resting for a day after moving from Balmoral, Aberdeenshire, yesterday.

The Queen’s son will lead her family in the painful procession, which could see his children Prince William and Prince Harry are once again showing a united front.

Full details of the royal mourners have yet to be released, but there is speculation that the new Prince and Princess of Wales, William and Kate, and the Duke and Duchess of Sussex, Harry and Meghan, will be part of the group.

Walking behind King Charles, the royal entourage is expected to include Prince Andrew, the Duke of York, Prince Edward, the Earl of Wessex, Anne, the Princess Royal and her husband, Rear Admiral Sir Tim Lawrence.

Meanwhile, Camilla, the Queen Consort and other members of the monarchy will follow behind in cars.

The public will be able to view the coffin to pay their respects for 24 hours before it is taken to London ahead of a period of repose.

The The Queen’s state funeral will take place a week today, Monday 19 September and will be a bank holiday.

Later this afternoon, the King and other members of his family, likely his siblings, will hold a vigil at the cathedral in honor of their mother.

Charles and Camilla are currently in London, but before departing for the Scottish capital later they will visit Westminster Hall where both Houses of Parliament will offer their condolences and the King will respond.

The King will also inspect a Guard of Honor at the Palace of Holyroodhouse, before attending the Keys ceremony in the forecourt.

Condolences will be offered by the Scottish Parliament when Charles and Camilla attend to receive an offer of condolence, with the King responding.