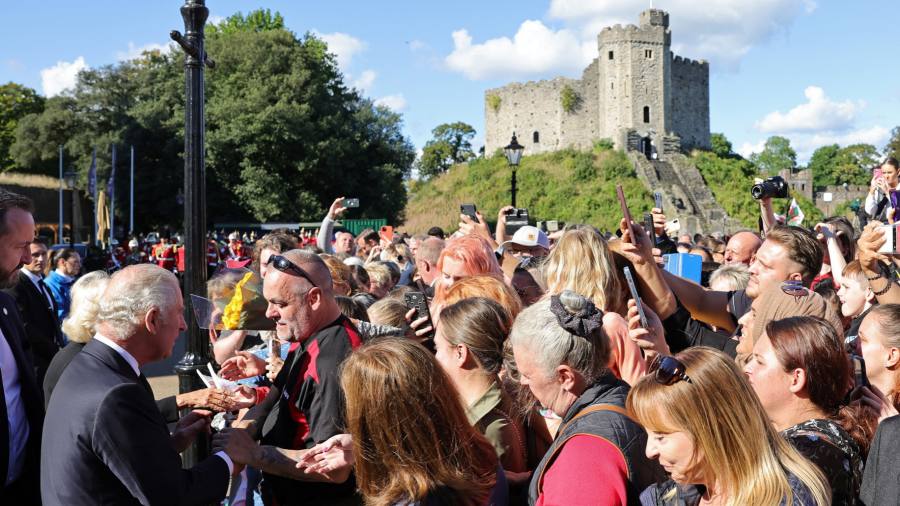 King Charles told politicians in Cardiff on Friday that Wales “could not be closer to my mother’s heart”, adding that his son William, the new Prince of Wales, had a “deep love” for the country.

The king was speaking to the Welsh Senedd after attending a service of prayer and reflection at Llandaff Cathedral in the Welsh capital on the final stop of his tour of each of the UK’s nations, a public show of commitment to the union in the week since the death of his mother.

Earlier this week he received condolences and met politicians in the Scottish Parliament and Hillsborough Castle in Northern Ireland.

On Friday thousands gathered in the Welsh capital to greet their new monarch, waving flags along the King’s Route. Sam Warnock, from the south Wales town of Bridgend, said she was there with her 11-year-old daughter Zaria, who was dressed in a Welsh flag, to experience a unique moment.

“I kept her out of school because she’s history,” he said. “It will be a once-in-a-lifetime opportunity and something she can tell her children and grandchildren about. It’s the least you can do.”

The new king has spent most of his adult life as the Prince of Wales but was criticized by some, including nationalists, for announcing he had bestowed the title on his son without consulting the Senedd.

Welsh First Minister Mark Drakeford, a Republican, said this week there needed to be a “legitimate debate” about the future of the post, although he stressed this was not the week to have it. Polling conducted for ITV in 2018 showed that the majority of people – 57 per cent – were in favor of William taking over from his father, with 22 per cent in favor of scrapping the title.

Queuing to enter the castle, Colonel Mike Snook said he was firmly in favor of continuing the role.

“It’s a debate that’s happening in the usual circles,” he said, a reference to a vocal minority in favor of Welsh independence. “I think the vast majority of people in Wales have absolutely no doubt about the matter and it is absolutely right and proper that Prince William should immediately succeed Charles as Prince of Wales.”

The republican alternative to the monarchy would mean politicians “who most of us don’t think are of particularly high quality have been elevated to a position they don’t deserve”, he added.

However, several hundred anti-monarchy campaigners turned out to greet the new king, their boos drowning out the cheers in some parts of the crowd, while some whistled the Welsh national anthem. The placards carried messages in both English and Welsh, including the slogan “Not my king, not my prince”.

“The new king announced a new Prince of Wales without consulting the people of Wales, so we felt compelled to arrange something on the day of his visit to Wales,” said protest leader Bethan Sayed, a former member of the Senedd who had represented nationalist party. Checkered Cymru.

“We hope to organize more events in terms of coronations and investitures, because we do not believe that someone should be born in a privileged place to reign over us.”

Charles’ accession as Prince of Wales in 1969 was greeted by street parties but also a rise in nationalism, including bomb plots.

Will Hayward, author of a new book about the country’s feelings about independence — Independent Nation: Should Wales Leave the UK? — pointed out that much had changed since then, including Wales becoming a state “in its own right” and with a much greater place for the Welsh language.

“There is no ‘Welsh view’ of this,” he added. “It’s nuanced and probably depends on your own feelings about Wales and your stance on the devolution debate.”