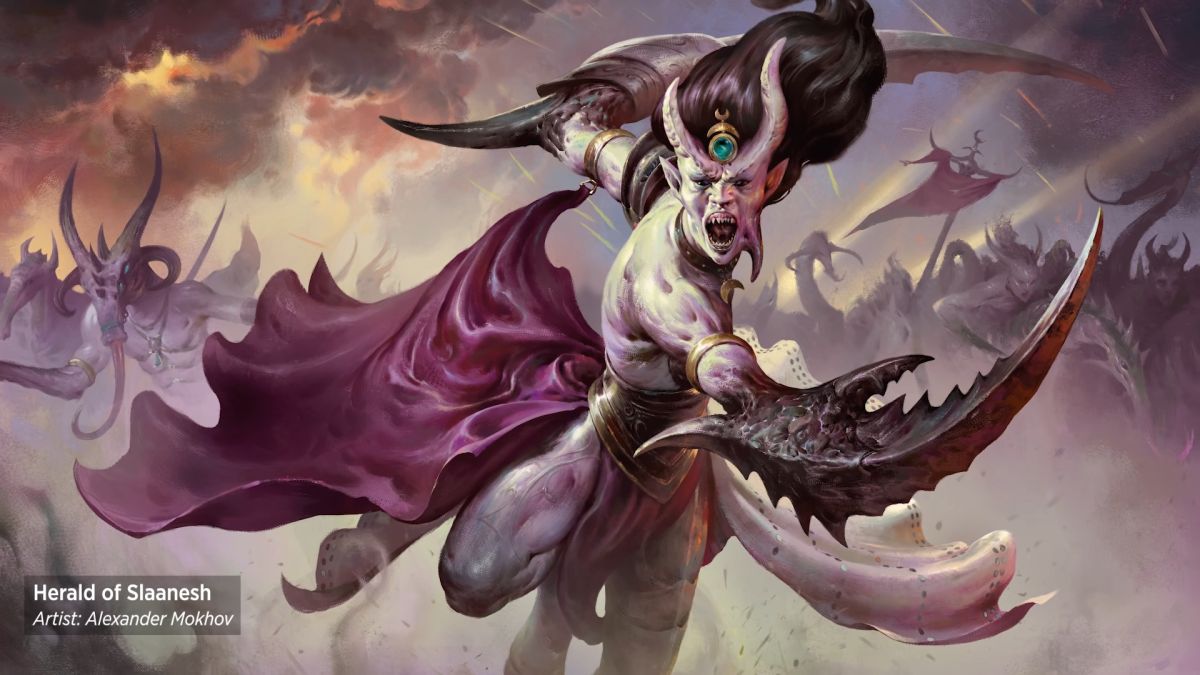 There is a military tactic that warriors love called the hammer and anvil. You divide your army into two forces, the slower and stronger of which pins down your opponent, holding them in place—the anvil—while the faster force maneuvers into a flanking position—the hammer—and then bring the two together . If you’ve played Total War: Warhammer 3 as Slaanesh, you’ll know that it’s an army without an anvil. Slaanesh is all hammer, all the time.

So it’s fitting that Keeper of Secrets, a greater demon of Slaanesh, appears as a red card in Magic: The Gathering’s Warhammer 40,000 crossover (opens in new tab). Red is the traditional color of Magic’s most aggressive cards, and usually those with attack-boosting keywords like haste and first strike.

The Keeper of Secrets has both. You don’t need an anvil when you can just bang two hammers together for the same effect, right?

The Keeper of Secrets also has an ability called Symphony of Pain, which means that whenever you cast a spell from anywhere other than your hand, you deal damage equal to that spell’s mana cost. Keep an eye out for keywords that will trigger this, such as flashback (you can cast a spell from the graveyard), cascade (you banish cards from your library until you flip one with a lower mana cost, then cast it for free), and bounce (you cast a spell a second time the turn after it is cast). Or maybe the Chaos-themed Ruinous Powers deck will come with cards like Sen Triplets, which allow you to look at another player’s hand and then cast spells directly from it. Honestly, this sounds exactly like what I would expect from Tzeentch.

The Warhammer crossover will feature four decks for the Commander format, which is the cold form of Magic where two or more players, usually four, engage in a free-for-all where each has a high-powered legendary creature to represent them on the field . Warhammer x Magic premade decks come with two options for your commander.

These 100 card commander decks (opens in new tab) will be released on October 7th, but there will also be three Secret Lair crossovers (opens in new tab) releases with even more Games Workshop-themed Magic cards available for order from October 17th to November 14th. One will feature the orks of Warhammer 40,000, while the other two will feature cards based on Age of Sigmar and Blood Bowl.