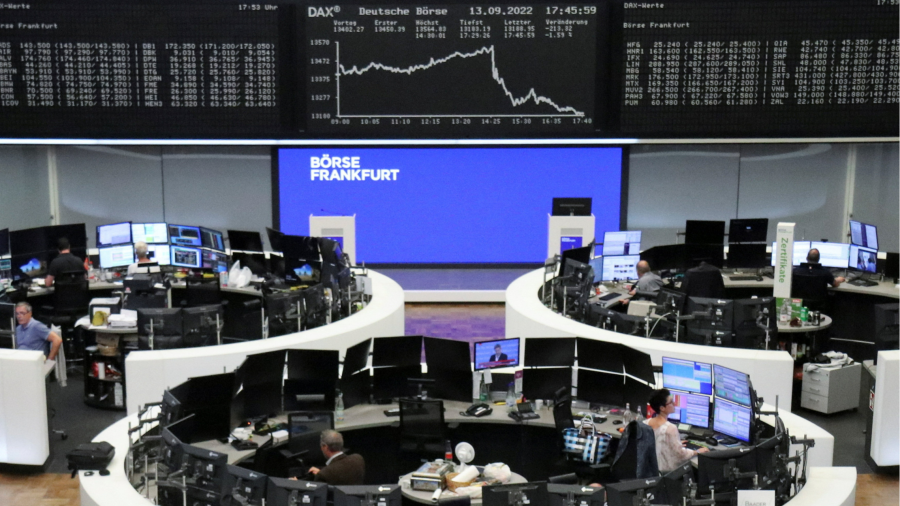 European stocks fell on Wednesday after the worst sell-off on Wall Street since June 2020, as higher-than-expected U.S. inflation data fueled bets on more aggressive rate hikes from the Federal Reserve.

Those declines came after the U.S. S&P 500 posted its biggest drop since the early days of the pandemic, falling 4.3 percent on Tuesday, following a higher-than-forecast August inflation reading.

Consumer prices in the world’s largest economy rose 0.1 percent in August from a month earlier, official data showed, compared with expectations for a 0.1 percent drop. The annual rate came in at 8.3 percent, down from July’s rate of 8.5 percent but above economists’ estimates of 8.1 percent.

The inflation report prompted investors to raise expectations about how far and how quickly the Fed will raise borrowing costs, with markets now pricing in a 1-in-3 chance that the US central bank will raise interest rates by a full percentage point this month. according to CME Group data based on trades in federal funds futures. A move of that magnitude would follow two consecutive increases of 0.75 percentage points.

“Two historically large hikes this summer appear to have had a weaker immediate impact on the inflation landscape than expected, leading markets to believe the Fed may be forced to make the hike of the century,” JPMorgan strategists said.

Markets now expect the Fed’s main interest rate to peak at about 4.3 percent in March 2023, up about 0.3 percentage points from Monday.

The tech-heavy Nasdaq Composite, whose constituents are seen as the most exposed to higher interest rates, closed 5.2% lower on Tuesday.

Mansoor Mohi-uddin, chief economist at Bank of Singapore, said the August consumer price index data “increases our belief that the Federal Reserve will remain hawkish.” He added that “the possibility of further rapid Fed rate hikes will increase the risks of the US slipping into recession in late 2023 or early 2024.”

In currencies, the yen fell as low as ¥144.95 to the dollar, around a 24-year low, before recovering after the Bank of Japan conducted an “interest rate control” with global banks, often seen as precursor to intervention to dampen currency volatility.

New data on Wednesday showed UK inflation fell below 10% in the year to August, defying expectations that it would rise above July’s 10.1% on the back of lower petrol prices.

In government debt markets, the yield on the two-year U.S. Treasury note, which is sensitive to changes in interest rate expectations and hit its highest level since 2007 on Tuesday, added 0.03 percentage points to 3.79 percent. Bond yields rise as bond prices fall.

Futures tracking the S&P 500 were up 0.1% in early European trading on Wednesday.