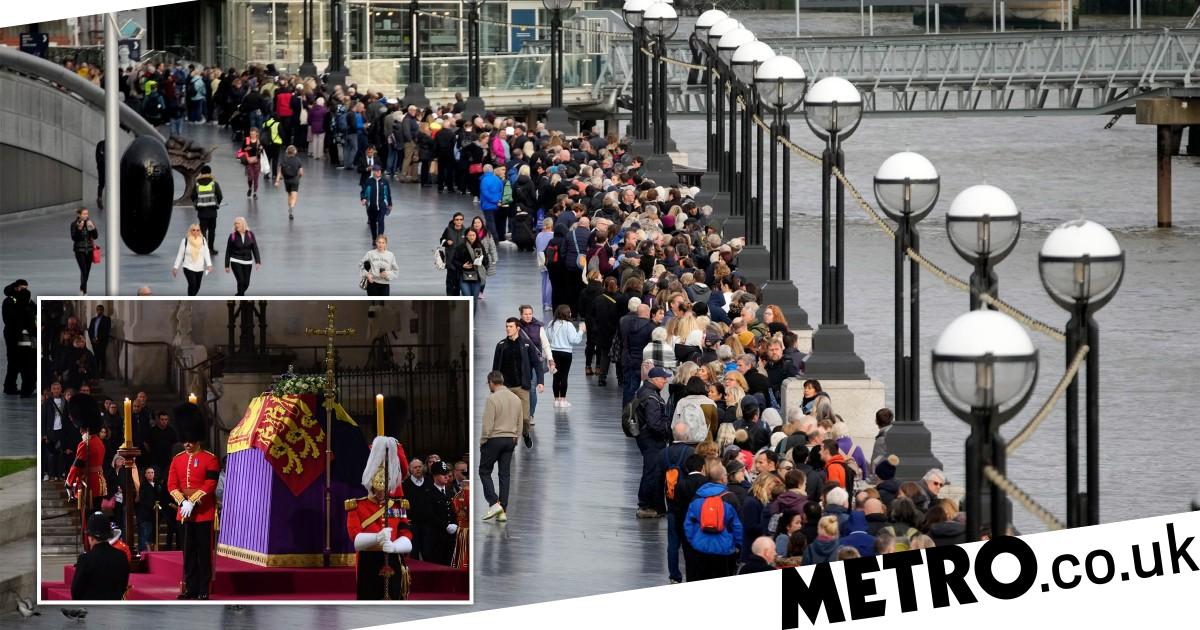 People have been warned not to try to join the queue to see the Queen lying in state as the entrance has been closed for “at least” six hours.

This is because it has now reached capacity, stretching back right to the end of the route at Southwark Park.

The estimated waiting time for mourners has increased to at least 14 hours.

In a tweet, the Department for Digital, Culture, Media and Sport said: “Southwark Park has reached capacity. Entry will be suspended for at least 6 hours. Sorry for any inconvenience.

“Please do not attempt to join the queue until it reopens. Please check back for further updates.’

Thousands of people are currently in the queue, which is over four and a half miles long.

A live tracker from the government showing people how long the queue has stretched now says it’s in effect and entry is “paused”.

But people continue to enter Southwark Park to queue despite instructions not to do so until at least 4pm.

An employee in line said they have not yet received instructions to close the gate and stop more people from joining.

Hundreds of people continue to enter the park through the gate.

Many have traveled from across the country to pay their respects to the Queen, with some coming from as far away as Leicester, Birmingham, Cornwall and Lincoln.

Nurse Melanie Pickman, 50, left her home in Swansea, Wales, at 11am to join the queue just before 3pm yesterday.

The mother-of-three said: “My sons think I’m crazy for coming to London to stand in a queue that some say can be 30 hours long.

“I just thought I should come. We will never see this again. He served our country for such a long time. We owe it to her to show our respect.

“She may be the queen, but she’s also someone’s mum, aunt and grandmother. I just think she’s a part of us too. We were lucky to have her.”

The government had warned that Southwark Park had become “extremely busy” before taking the decision to suspend entry.