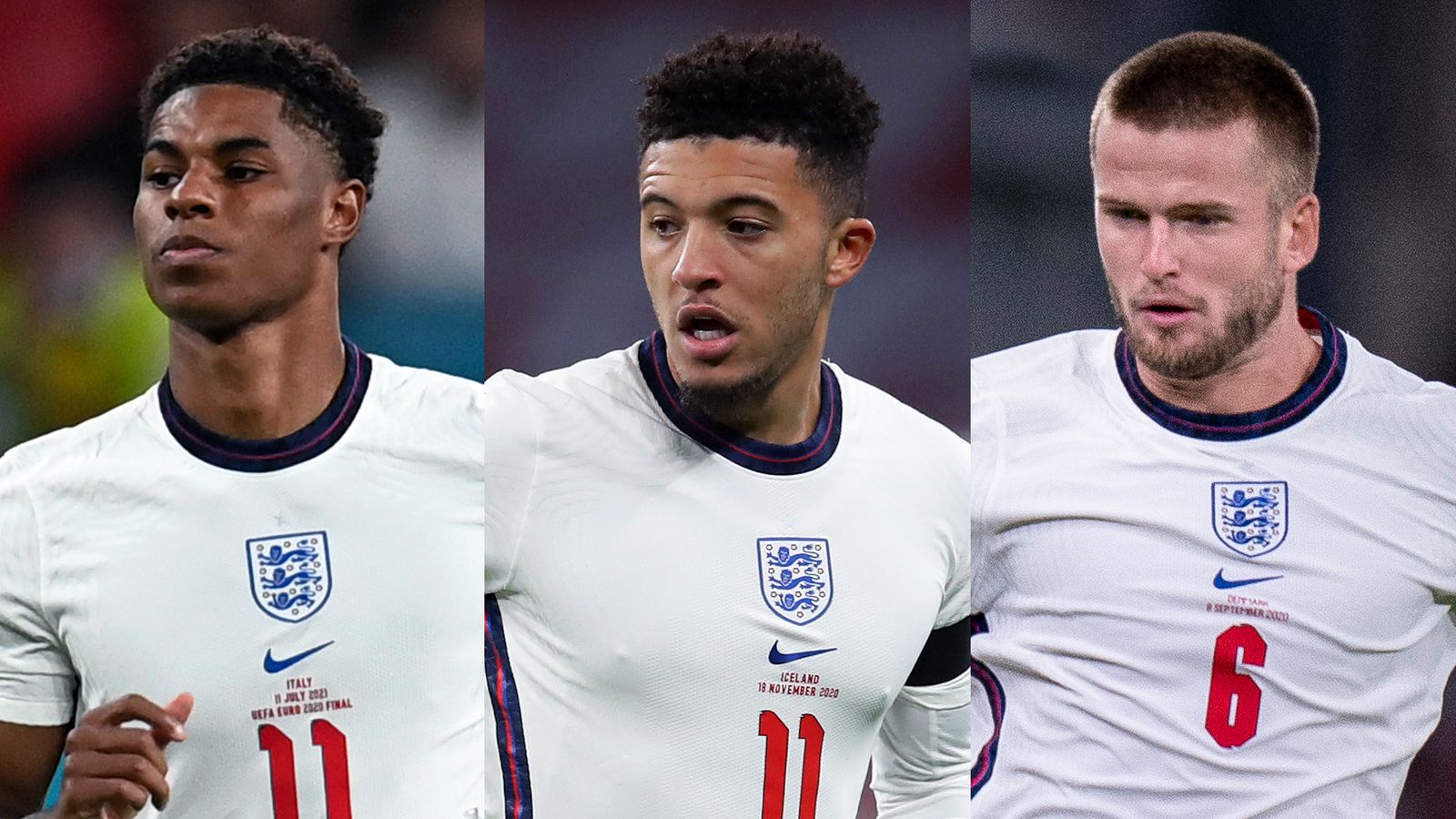 Manchester United’s Marcus Rashford and Jadon Sancho are both pushing for England recalls as Gareth Southgate prepares his final squad selection ahead of the World Cup.

It’s a key decision for the England manager. If either are ruled out for the two Nations League games against Italy and Germany this month, it is hard to see them in Southgate’s squad for Qatar in two months’ time.

It is looking increasingly likely that Tottenham’s Eric Dier will be reintroduced into this squad, despite his exile in England now stretching to nearly two years.

Liverpool’s Harvey Elliott and Brentford’s Ivan Toney are both very much in the England manager’s thoughts, although it remains to be seen whether anyone will be included at this stage.

The choices the England manager now makes will give strong clues to his plans for Qatar, with just four full international sessions before he selects the 26 players to represent their country at their first winter World Cup.

So – while Southgate may name a larger squad than usual so he can make final assessments on a fringe player or two – don’t expect a raft of experimental new faces to be called up.

Is there room for Rashford and Sancho?

Sancho was a regular for England until the Euro final 14 months ago, when both he and Rashford missed penalties in the decider against Italy.

Sancho’s form dipped the following season at Old Trafford, as did his prospects in England.

But the 22-year-old former Borussia Dortmund winger has bounced back from his extended spell on the sidelines and his all-round game has been even better than his stats suggest – he has scored two goals in six Premier League games so far the season. . 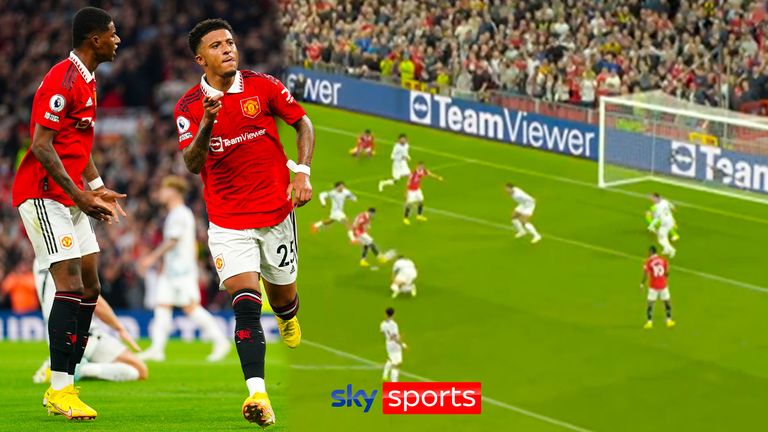 Watch Jadon Sancho’s stunning goal against Liverpool from all angles. The 22-year-old opened the scoring in Manchester United’s 2-1 win over Jurgen Klopp’s men.

If they return to England, the pressure will be on the Manchester United duo to prove they deserve a place at the World Cup. This is really their last chance to convince Southgate that he deserves his place, in one of the most competitive positions in the England team.

Raheem Sterling, Phil Foden, Bukayo Saka, Jack Grealish, Mason Mount – all remain some distance ahead of Rashford and Sancho in England’s pecking order at the moment.

Although Jarrod Bowen’s difficult start to the season with West Ham may well cost him his place in England this time around, meaning he is a long shot for a place on the plane to Qatar.

Southgate has been impressed by Toney’s form

Rashford has been used as a lone striker by Ten Haag, so if he is called up by England, could another striker miss out?

Dominic Calvert-Lewin, Patrick Bamford and Callum Wilson are all out, so Tammy Abraham is expected to keep his place despite a dip in form with Roma. Southgate sees him as the natural back-up right now for Harry Kane.

With Southgate watching from the stands, Abraham was forced off with a shoulder strain last weekend against Udinese. But the injury was not serious and the 24-year-old returned with the winner against Empoli on Monday night.

When it comes to Toney, Sky Sports News the England manager was said to be impressed – as were many pundits – by the form of Brentford’s main man. His stats for the season surpass even Rashford’s: Toney has five Premier League goals and two assists so far.

The 26-year-old’s excellent form dates back to last season as well – he has scored 13 Premier League goals since January. This makes him hard to ignore.

Is this Dier’s big chance?

With Harry Maguire in the mud (he hasn’t started a Premier League game in a month and is seemingly lacking in confidence) Southgate has a problem in defence.

John Stones and Kyle Walker are dealing with minor injuries and will therefore need to be assessed ahead of any England call-ups. If included, their playing time may have to be counted.

All of this plays into Dier’s hands. His consistently impressive displays for Spurs – towards the end of last season and the start of this one – mean he is arguably England’s most in-form centre-back at the moment. It was also before the last squad selection, in May, when Southgate admitted he was close to a recall.

But the England boss also pointed out that Dier is used in quite a specialist position by Antonio Conte – the midfielder of a back three – and that England often switch between that formation and a back four.

“We know Eric and we don’t know some of the younger guys,” was how Southgate explained his omission in May. Dier has not played for England since November 2020.

No problem in midfield

Whether Conor Gallagher has done enough to retain his place will be the key question here. He probably has, and he will be hoping that new Chelsea manager Graham Potter gives him as much playing time as Thomas Tuchel.

Calvin Phillips’ return to fitness will be a welcome relief for Southgate – he missed a month of football with a shoulder injury but came off the bench for Manchester City late on in last week’s Champions League win over Sevilla.

However, England’s medical staff will have to be careful with Phillips’ workload as he works his way back to fitness.

Otherwise, it is likely to be the usual midfield population of Declan Rice, Jude Bellingham, Mount and James Ward-Prowse.

With England number one Jordan Pickford missing with a thigh injury, it will be an opportunity for someone else to stake their claim as first-choice schoolboy.

Will any young player make the grade?

Unlike his predecessor Roy Hodgson, Southgate’s instinct is to name a larger starting squad in case of any subsequent injuries, rather than offering late call-ups to players initially out of camp.

Coupled with this, the England boss is always looking to promote under-21 talent and the logistics for this camp could help 19-year-old Liverpool star Harvey Elliott.

Elliott is currently part of the U21s, whose friendlies have been arranged to mirror those of the senior team: they play Italy away a day before Southgate’s side, then Germany at home a day after senior team have the same confrontation at Wembley.

Elliott’s promotion to the senior ranks at any stage would be about as seamless as it gets.

Another bright youngster, Sporting striker Marcus Edwards, impressed earlier this week with a top-scoring Champions League performance against Tottenham – the club who released him three years ago. But don’t expect a surprise for him. Yet.

England’s opening World Cup match against Iran is in 68 days.