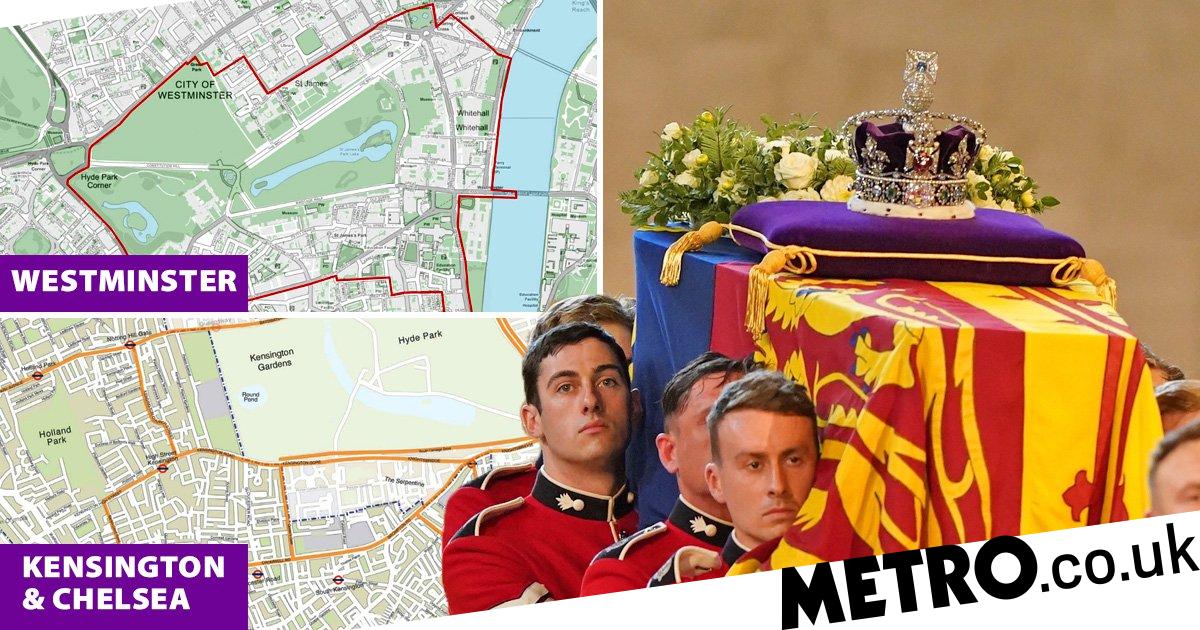 Large sections of the central London will be closed to traffic for the Queen’s funeral, with drivers being warned to avoid the area.

Those who have their own car or plan to take a taxi or Uber should check their route before traveling on the days surrounding it.

The state funeral will take place on September 19, with a procession before and after the Queen’s coffin is taken to the service at Westminster Abbey and then to Windsor Castle, where she will be buried with her husband.

There is expected to be major travel disruption on the day itself and the days before and after, with even flights being affected.

Road closures and bus diversions in London will continue into next week as the removal of barriers and other event infrastructure is expected to take several days.

Maps show the roads in Westminster and Kensington and Chelsea which will be closed.

Main roads in areas including Notting Hill, Kensington and Earl’s Court will be closed as far south as the Thames and as far east as Sloane Square in Chelsea. Roads around Hyde Park, St Jame’s Park and Whitehall will also be closed.

Surrounding roads that are open will also be busier due to the displaced traffic.

In addition to the procession and funeral, there is a major security operation as world leaders, including US President Joe Biden, will be in town for the event.

Transport for London advice said: “Avoid driving into central London if you can.

“There are major road closures in central London (especially Westminster). Some of them will continue in the days after the State Funeral.

“Allow extra time for your journey and consider an alternative route.

“Road closures may change or be extended during the mourning period.”

It advised drivers to avoid returning home immediately after the funeral “to avoid the busiest afternoon period” and to check the National Highways website for travel updates.

There was a 6% increase in traffic using six sections of the London-bound motorway on Thursday compared to the same day last week.

TfL also announced that buses will pull over “if it is safe and practical to do so” and switch off their engines during the minute’s silence on Sunday at 8pm. and the two minutes of silence on Monday around 11.55 am.

Most planned major road closures serving London have been suspended until Tuesday to ease traffic congestion.

Train services in London are also expected to be busy.

Three central London Underground stations will be closed for the Queen’s funeral to avoid overcrowding, with passengers unable to start or end journeys at Westminster, St James’s Park and Hyde Park Corner stations for “the longest part of the morning’ on Monday.

Meanwhile, more than 100 flights at Heathrow Airport will be canceled to avoid disruptive aircraft noise procedures at Westminster Abbey and Windsor Castle.

The west London airport said 15% of its 1,200 flights due to take off or land on Monday would be cancelled.

British Airways – the worst-hit airline – will cancel 100 short-haul flights due to the restrictions.

Virgin Atlantic has announced it will cancel four flights.

Transport for London commissioner Andy Byford said TfL was “working around the clock” to ensure mourners traveling to the capital could pay their respects to the Queen.

He continued: “It will be extremely busy in London on Monday and there may soon be changes and queues to get into stations due to the large number of people travelling.

“We will run a safe, reliable and frequent service to ensure everyone can travel home safely after paying their respects.

“We would encourage people to consider using the wide range of facilities open across London for refreshments after the state funeral.

“As well as allowing time to continue to be respectful, this will help ensure smoother journeys home for everyone.”