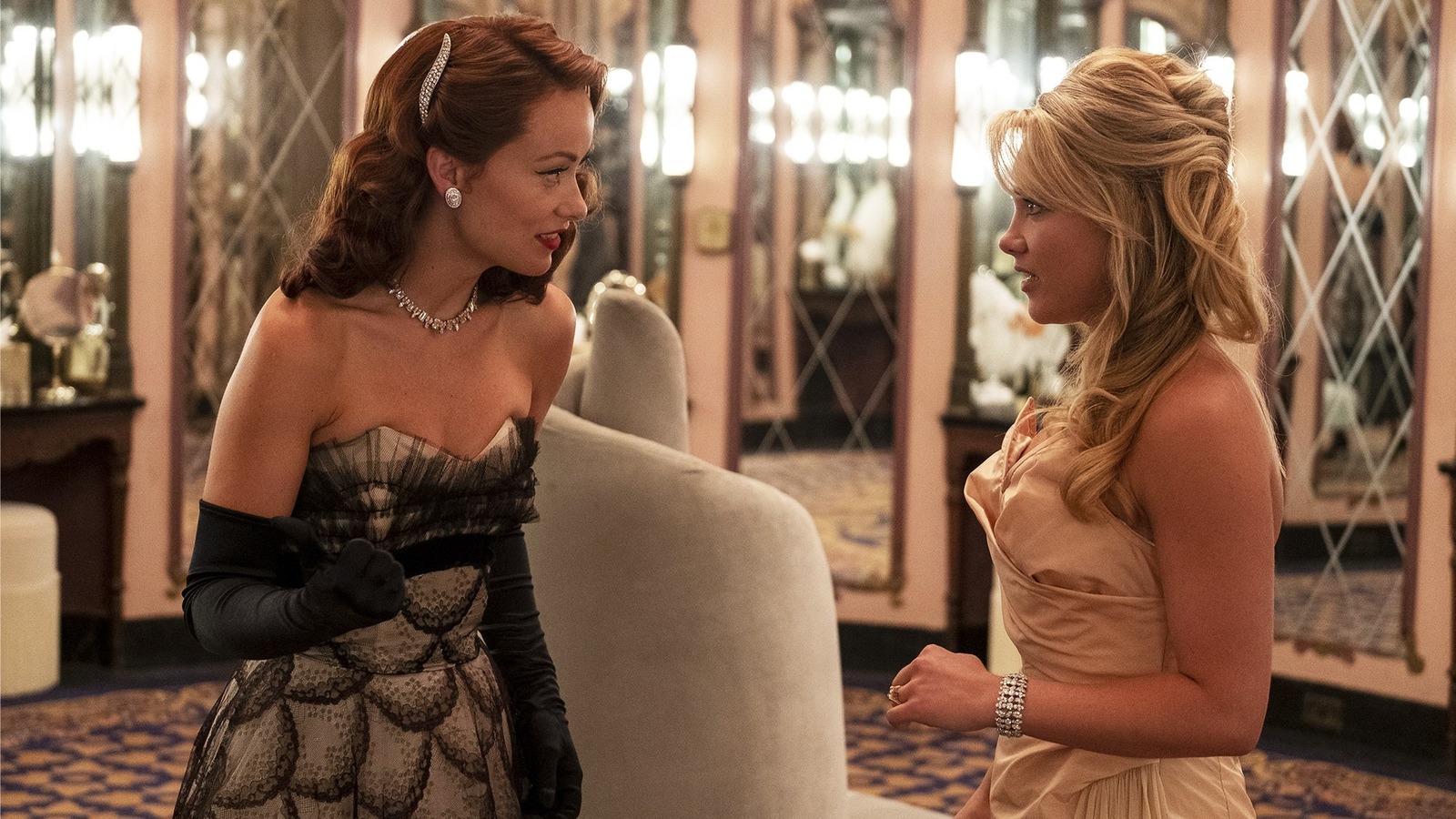 Like you said, there are a lot of interior scenes, and usually with a few characters, but where do you start when you start working on a scene with so many extras like the ceremony/party?

I will say that when I first read it, I was like, “There’s a lot of description of this sexual tension in the room.” And I was like, “Wow, Dita Von Teese should be in this, she’d be perfect for that.” She happens to be a friend and a neighbor. So, I mentioned Olivia, we had a meeting. I’m like, “You should have Dita.” And she’s like, “Oh my God. , that would be incredible. I don’t even know how that could happen.” I’m like, “Well, let me text her.” I texted her, and at the time, because we were shooting right after lockdown, she had to cancel her tour, and she says , “Yeah, I’m bored at home, I’d love that.” So it worked, and it was really fun to have her there, because I think that really added to that sexual tension that was on the page and the debauchery and decadence of that scene.

For me, I think it was really fun and I love doing these costumes and, I asked Bulgari, which is a really famous jewelry brand, if we could use some of the high archival jewelry, so that was really fun. But actually the part of that shoot that I liked the most was the scene between Bunny [Wilde] and Alice [Florence Pugh] in the powder magazine. The way Matty shot this room, it’s a mirrored room with this beautiful kind of round ottoman that Katie had in the middle of the room. I love this scene. I thought it was especially beautiful the way it was shot and designed.

It’s funny you bring up the sexual energy, because Chris Pine looks like he wants to either kiss or kill someone in this movie. How would you like to help him establish himself as this powerful cult figure?

Oh, it’s all Chris Pine. I love his work in this movie. Chris personally likes to be barefoot a lot. The scene when everyone is at his house, and they’re talking about him and Shelley’s house, they change after the world, and it’s the outdoor scene by the pool, Chris wanted to do the scene barefoot. I say “100%”. Frank has cult leader confidence and is great. He looks like the perfect man and figure, the kind of man I think men and women want to be and are in love with. He has it in spades. So the suits didn’t do much. I just had to point out what he was already doing.

It was a really crazy time to be making a movie. We were one of the first adapters out of the gate after lock-in to make a movie. I think most of the movies were started during COVID and came back. But I believe we are the first film that started from scratch after COVID. For me, it was scary, because trust is a very important part of my job. I’m the only department that meets an actor and then they have to strip down and trust me, right? This is to always read people’s facial expressions and body language. I didn’t know how that would work with masks, and we didn’t even have masks, we had covers. So one of the things I asked for was to have meetings with the Zoom actors first to meet them unmasked as we speak now. And it was so wonderful.

That’s how I first met Chris on Zoom. It was great because he was at home and relaxed. Chris is also such a thoughtful actor and he spent a lot of time thinking about Frank and doing research and who he would be. So we had an hour-long Zoom session, which really, really helped me. By the time I met Chris in person, there was a beginning of a relationship and an understanding, and that made all the difference for me. I don’t know if it made a difference for him, but it made a difference for me, because my goal is always that way it’s just like my relationship with the director. I want to get inside their head and I want to understand their process and what will help them, and at the same time bring something to it.

It is ephemeral. Costumes can really be about tone and tone and mood too, so that’s a part of my job that I love. I always say that costume designers are human detectives, because it’s a psychological assessment of not only the character, but the actor, the director, and how I’m going to help them get there. Because for some actors, costumes are a huge part of their process, and for other actors, they’re not at all. So you never know what you’re getting. Some actors really want that tactile experience of being in a costume to transport them to a time and place, and with other actors, it couldn’t be less important to them.

What actors have you worked with that, as you said, costumes are a huge part of their process?

Well, I wouldn’t say I know, but it’s just because I didn’t ask them if they’re important, just their level of commitment. So Florence, talking about this film, Florence and Chris were incredibly involved in the discussions around the costumes. They had a lot of costume changes, but I think Harry was more curious about the process being new to acting. He is a brilliant performer. I think the thing about Harry Styles that’s so genius is that he plays with clothes in a way that’s super bold and playful and sometimes non-binary, there’s a curiosity there. It was almost strange to put Harry in these 50s clothes, because he has such an incredible personal style. To see him in a character like that, really embracing bro culture I don’t think he is. To his credit, he looked so good in the clothes. I think they really helped us. I think celebrity can be difficult when watching movies. I hope people believe. I hope the costumes, hair and makeup will help the audience, especially the young people who will come to see it because they are in it. I hope it helps with the suspension of belief so they can get down to the job Harry is doing. I think Harry does a really amazing job in this movie.