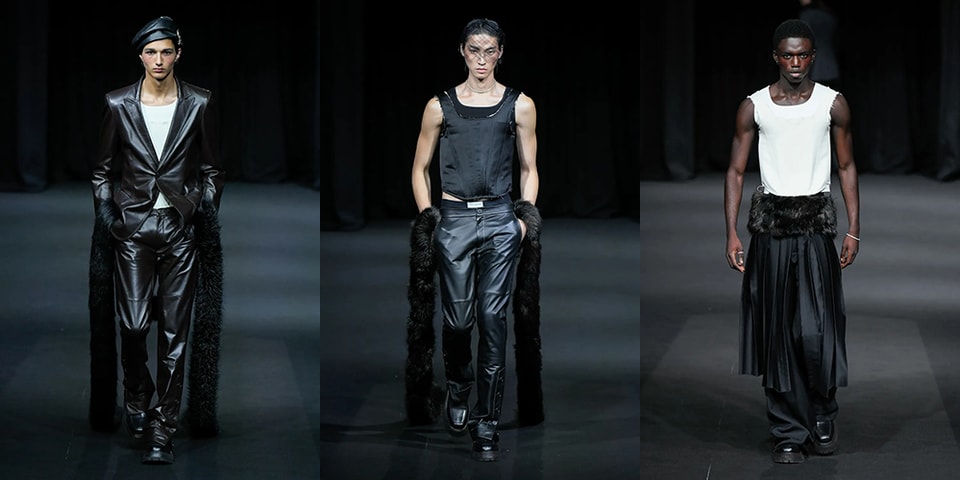 Beginning with a minute’s silence, one of the UK’s most brilliant designers — Daniel W. Fletcher — not only returned to London Fashion Week, but officially launched the Spring/Summer 2023 season. For FW22, Fletcher paid tribute to his late father with his work, “Before the Morning Comes,” showing a darker side to the designer while referencing rock culture and the memories he shared with his dad.

For SS23, “Stand and Deliver” was a combination of respect and rebellion.

Crowds sat against walls draped in gold mail as anticipation for LFW’s inaugural show grew. Opening with an all-black morning suit for the death of Her Majesty Queen Elizabeth II, cut from British wool and accented with an armband, the affair from the offset was celebratory.

The spirit of London could be found in the fibers of Daniel’s work this season – a morning suit not only opened the show, but also set the tone for what’s to come. Mayfair gentlemen with their very existence-defining tailored Saville Row numbers influence the Prince of Wales checking the catwalk, while the clash of satin and faux fur exudes a very different London language, this all-too-common look . Combined, the collection commented on the coming of age many hopefuls who come to London are looking for the experience. a sense of finding purpose and self. With the suit for starters, our formal work lives were portrayed, but the playfulness of the day was expressed through Fletcher’s self-reference, drawing from SS19’s menswear-style corsets and FW20’s racing jackets and pajama sets, the latter this once adorned with tonal florals.

But as night falls, Fletcher looks towards the darker side of London, the one marked by the free spirit of the city’s queer nightlife. Leather blazers, satin pads – in turn more sensual as they tie loosely at the back – and dresses embellished like stars in the night sky evoke this on the runway.

To emphasize this sense of glamor and dramatic themes throughout, the clothes were accented with jewelery from London-based company Hatton Labs. Shearling bags created in collaboration with Axel Arigato echoed the theme of escaping the big city as Daniel W. Fletcher leather patches spread across the accessory like passport stamps, while six meters of faux fur hung from the models brought back the extravagance and queer grandeur of Fletcher.

“The place I was when I designed my last collection… It was really a tribute to my dad. While this was looking back on the last ten years of my life in London. It’s very much inspired by all those people who made London what it was – from the punks of Kings Road to the pearly Kings and Queens of Soho. All these people who have contributed to the culture we have now, play a huge inspiration in this collection. It’s really about them.

The point of putting on a show is, it’s a show. For me I like to tell a story. We start in morning suits and then go to daytime, walking around London and then into the dark nights of Soho.”

You can view Daniel W. Fletcher’s SS23 “Stand and Deliver” collection in the gallery above. Stay tuned to Hypebeast for more London Fashion Week Spring/Summer 2023 content as the week progresses and be sure to follow @HypebeastUK for live content.