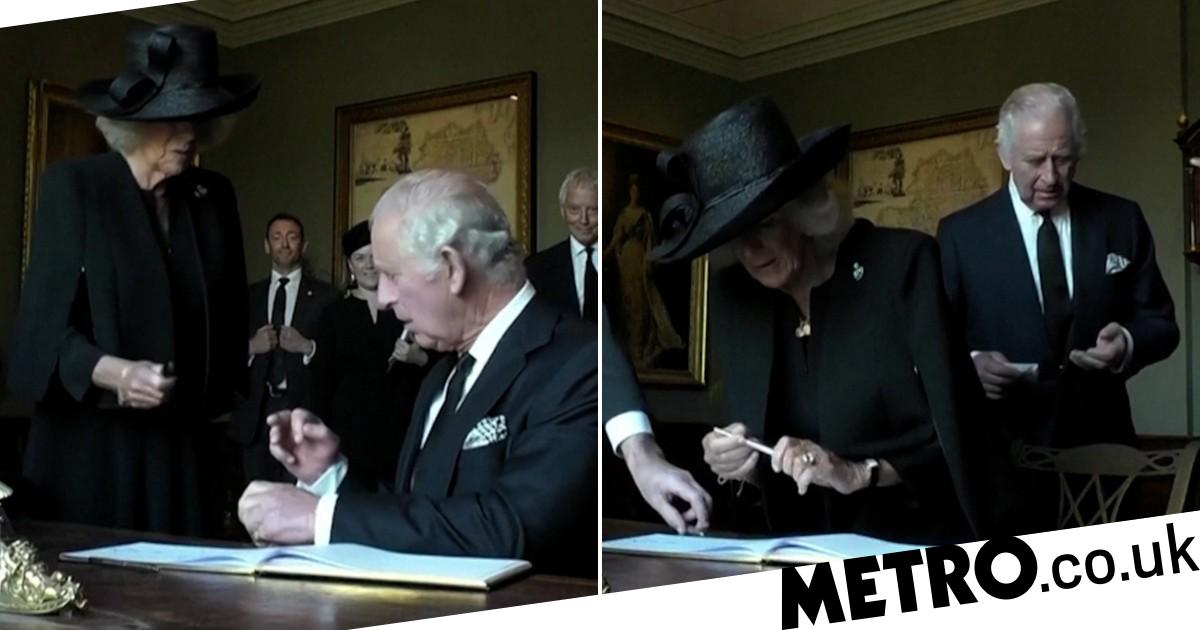 King Charles was confronted with a leaking pen during his visit to Northern Ireland today.

The new monarch was attending a signing ceremony at Hillsborough Castle when his pen suddenly burst.

He also had to ask for the date, perhaps a sign of the pressure he’s been under this past week and the whirlwind of public events and duties he’s taken on since his mother’s death.

The exchange of pens was caught on video.

The King stood quickly as the pen seemed to leak ink into his fingers.

“It goes everywhere,” added Camilla the Queen Consort, as she hastily found a new pen.

An assistant then ran to retrieve the leaking pen while the King wiped the ink with a handkerchief.

The incident took place before a memorial service at St Anne’s Cathedral.

A similar accident happened when the King was inside St James’s Palace during the Council of Accession ceremony last week.

The 73-year-old frantically took a pen box from his desk to move, which onlookers described as “too small” for the huge document and stationery.

The King was seen scowling at an aide, implying that he wanted the marker tray removed before anyone saw him removed.

Prince William then sat down to sign the statement and had to awkwardly ask for his pen and pen tray to be returned.

The new king has spent many days performing ceremonial duties across the UK.

His mother the queen died less than a week ago.

It was held at Hillsborough Castle in County Down, where leaders of the five main political parties and the Speaker of the Northern Ireland Assembly also met.

Responding to the message of condolence on behalf of the people of Northern Ireland, King Charles III said: “In the years since she began her long life in public service, my mother has seen Northern Ireland go through significant and historic changes.

“My mother felt deeply, I know, the importance of the part she herself played in bringing together those whom history had separated, and in reaching out to enable the healing of lingering wounds.”