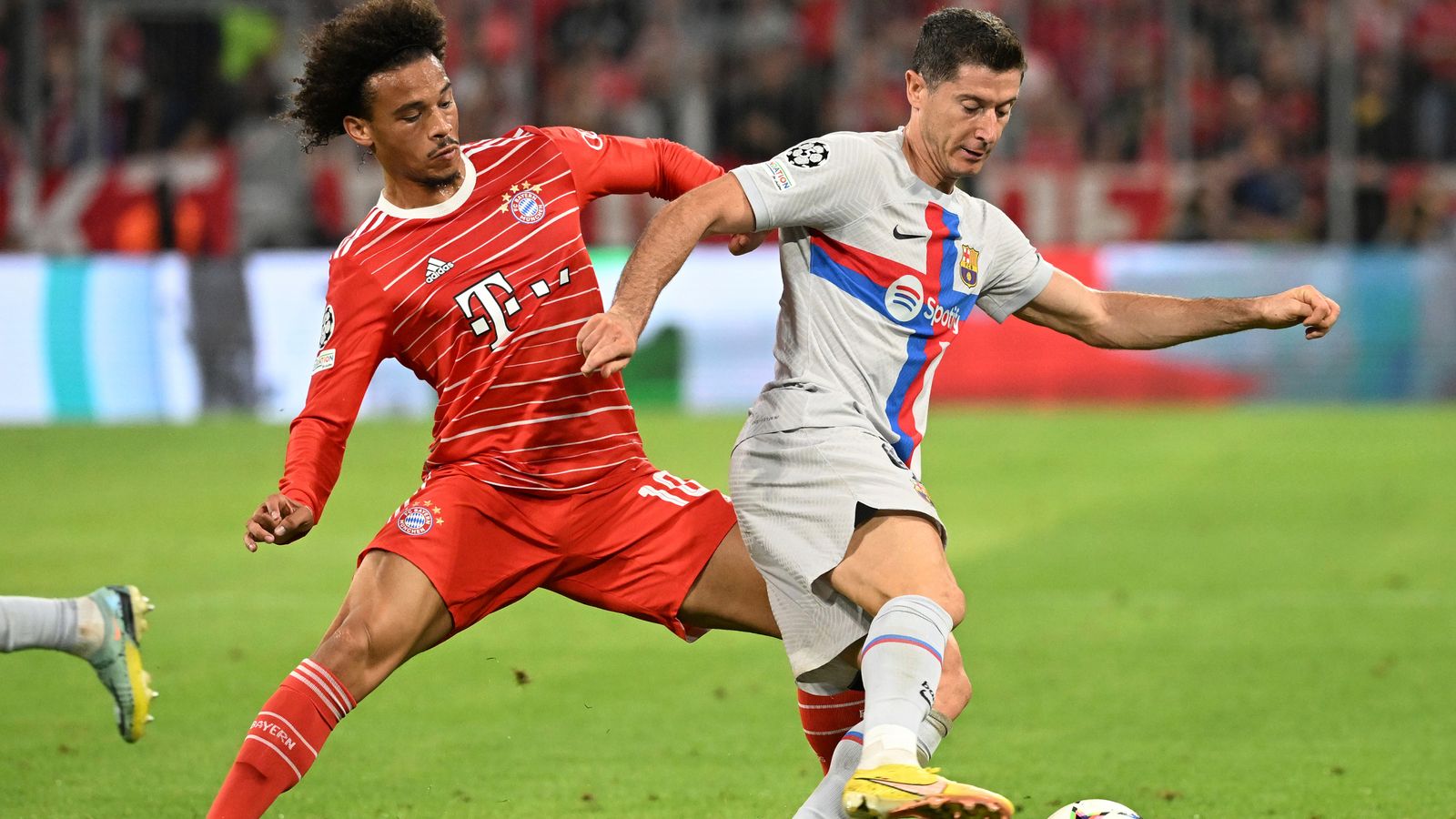 Goals from Lucas Hernandez and Leroy Sane helped Bayern Munich secure a 2-0 win over Barcelona in the Champions League to spoil Robert Lewandowski’s return to his old club.

Lewandowski left the Bundesliga champions this summer and had a difficult night at the Allianz Arena after failing to make the most of several chances in the Group C clash.

After a goalless first half, Julian Nagelsmann’s men opened the game early in the second period with Hernandez heading home Joshua Kimmich’s corner before good play from Jamal Musiala saw Sane fire home in the 54th minute for to keep Bayern top after two matches.

Bayern Munich’s Leroy Sane has been directly involved in nine goals (five goals, four assists) in his six home Champions League games since the start of last season, only Robert Lewandowski has more home appearances in that span (15) .

Edin Dzeko inspired Inter Milan in a 2-0 win at Victoria Plzen earlier in the group.

With Romelu Lukaku sidelined with a thigh problem, Dzeko stepped up for the Serie A side with a fine curling opener after 20 minutes and set up Denzel Dumfries to complete the points in the 70th minute.

Bottom-of-the-table Plzen were already down to 10 men at this point after Pavel Buha was given his marching orders on the hour.

Joel Matip he was the unlikely hero to get LiverpoolHis European campaign got back on track as his 89th-minute header secured a hard-fought 2-1 win over Ajax in group A.

After Jurgen Klopp declared their 4-1 defeat at Napoli a “horror show”, a response was needed at Anfield and Mohamed Salah’s opener helped settle the tension, but the Dutch side equalized before half-time.

Mohamed Quds smashed home in superb fashion and it was Ajax who looked the most likely to grab a second only for Matip to head home a corner late on to give Liverpool a vital three points.

Spurs were contemplating a night of disappointment as they looked set to be held to a 0-0 draw in Portugal before things went horribly wrong in the final minutes.

Paulinho nodded in from a corner and then with virtually the last kick, Arthur Gomes headed into the box to put Sporting top of the group with two wins as Tottenham academy product Marcus Edwards impressed against his old team.

Frankfurt joined Spurs with three points after they won 1-0 Marseille.

Jesper Lindstrom struck two minutes before the break and despite the introductions of Matteo Gueduzi and Cengiz Under, the home side suffered a second successive defeat in the competition.

Atletico MADRID was at the end of a late show at Bayer Leverkusen in group B.

The La Liga side had struck twice in stoppage time to beat Porto last week, but saw Robert Andrich and Moussa Diaby score in the final six minutes of the encounter in Germany to secure a 2-0 victory.

Club Brugge are top of the group after a stunning 4-0 away win Porto. Ferran Jutgla put the visitors in front with a quarter of the game to go and Kamal Sowah, Andreas Skov Olsen and Antonio Nusa were on target in the second half to earn the Belgians a superb victory.

Naplesthe game at Rangers postponed until Wednesday due to limited police resources in Scotland following the death of Queen Elizabeth II.