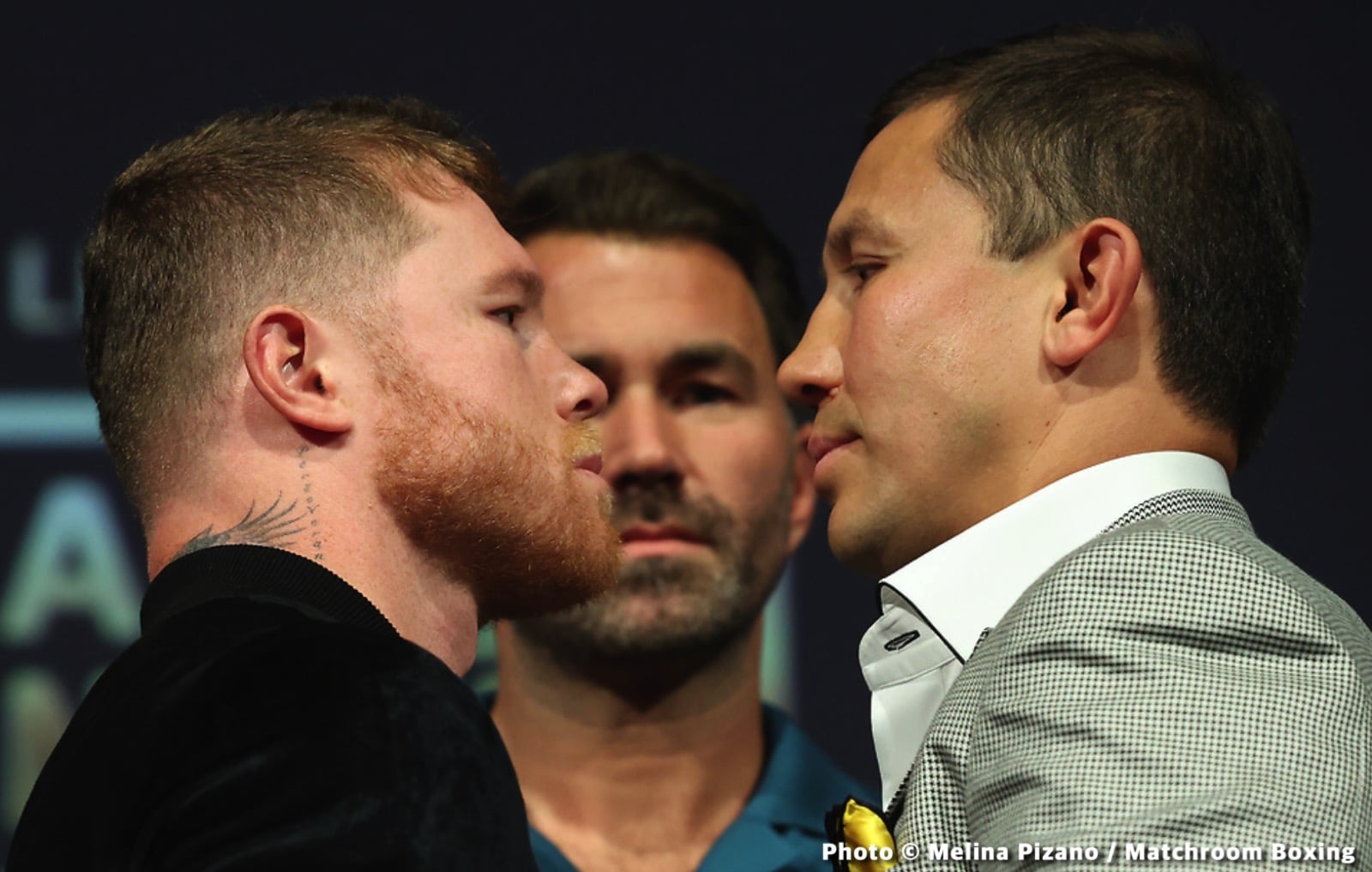 Your writer Bob Smith was so intrigued by this bout that he decided to come out of retirement as a boxing writer for a brief preview. He began writing articles, inspired by Golovkin’s rise in late 2012 and early 2013, and wrote about 60 articles for this site over a period of a few years before slipping back into obscurity around 2015.

This is a meaningful fight. It is not too late as some suggest. Yes, it is true that Golovkin has aged and Canelo has improved. But as someone who thought Golovkin clearly won the first fight and also won the second – at worst, it should have been a draw – that makes the fight even more interesting. Let’s start with the first match.

According to CompuBox, Golovkin outscored Alvarez in 11 of 12 rounds, and in total, by nearly 50 punches, which should have resulted in a clear decision win. After all, boxing is about hitting, not getting hit, and that’s what Golovkin did. However, the judges were impressed by two things: firstly, Golovkin did not completely obliterate Canelo, as he has done many of his previous opponents, and secondly, Alvarez hit Golovkin hard and his shots were faster and flashier, due to the of his quick hands. and beautiful technique. However, of the 24 exits that covered the first fight, 20 scored the fight for Golovkin, 3 deemed it a draw and only one scored the fight for Alvarez.

I believe Golovkin was surprised and intimidated by Alvarez’s hand speed and punch resistance and ability to fight back, so he kept a safe distance and didn’t push for the knockout. And at the time, for Golovkin not to win by knockout was a huge achievement – ​​he had tied I believe the record for the most consecutive title defenses, or nearly did. And he had a KO streak of 21 in a row before being forced to go the distance by the fast and hard hitting Daniel Jacobs. So a factor in the judge’s willingness to call it a draw was that Golovkin didn’t even knock Alvarez out, while he had in his previous 22 fights and won 21 of 22 by knockout.

Second, it’s true that Canelo out-punched Golovkin in 7 of 12 rounds. It’s hard to find people who believe that Alvarez clearly won the first fight or that Adelaide Byrd’s score was accurate – but arguably in some of the rounds Alvarez did the more effective power punching, at least numerically. Stylistically, Alvarez appeals to an American and Mexican audience, he has very fast hands and sharp shots, so regardless of the impact, his hard shots seem more effective than an Eastern European forward style, even if the punches are like being kicked. a mule.

Since the first fight was ruled a draw, the boxing public demanded a rematch, which took place a year later in 2018. And the result was just as controversial – of the 19 media outlets that covered the fight, 10 scored the fight for Golovkin, 8 called it a draw and only 1 of the outings favored Alvarez to win.

According to CompuBox, Golovkin won 8 of the rounds, Alvarez won three of the rounds and they threw the same number of punches in 1 round. So this should have resulted in a clear Golovkin win from the knockdown or no knockdown situation. But not so fast – Alvarez out-punched Golovkin in every round since the 4thu round and beyond, except for 5u round. And if you look at a subset of those hard punches, body shots, Canelo landed 46 shots to just 6 for Golovkin.

Again, two factors give reasons, if not justifications, why some judges and fans felt Canelo deserved the win. The first was that Golovkin proposed a “Mexican-style” fight where the two would go to the center of the ring and duke it out. In it, Alvarez called Golovkin’s bluff and came out ahead for this fight, making the smart guess that Golovkin couldn’t keep up with his quick hand speed, terrific counterpunching and the game’s best inside, as well as possibly superior his natural strength. So the fact that Golovkin adjusted and poked from distance and hit Canelo should have given him the win technically, but in the eyes of many fans, Canelo solved the Golovkin conundrum and successfully stood up to the power puncher. The other factor was that Golovkin was extremely hesitant to go after Alvarez specifically to the body, for fear of quick counters, likely with an uppercut.

I believe the reason Golovkin lost the 2n.d match on the judge’s cards, if not, CompuBox was advised by his then-trainer, Abel Sanchez, to avoid throwing shots almost entirely. I don’t understand this decision – body shots would have worn Canelo down, made him less likely to go forward and set up Golovkin’s right. Maybe a boxing expert can let me know why a trainer would advise this. In any case, Golovkin parted ways with Abel Sanchez after that fight and Alvarez secured a highly contested decision win.

From the Second Game

There is absolutely no doubt that since the second fight Alvarez has had the better record and has improved more and accomplished more. Let’s see what each fighter has been up to since September 2018:

Golovkin has only fought four times in the last four years – he beat Steve Rolls, a non-entity, by 4u round KO, and won a hard-fought and very close decision with Sergey Derevyanchenko, which some argue could have gone the other way, and then two stops against Kamil Szeremata (7u round RTD) and Ryota Murata (9u KO round). In his most recent fight, he looked quite troubled with Ryota Murata’s body work. He also missed some of the earlier rounds before returning to 5u round to dominate Murata until the KO. All of his fights were in the middleweight division. Some may argue that he has aged, and no doubt, he has chronologically, however, his last four fights have not been as intense, so in terms of rounds and damage done, Alvarez may actually be the “oldest” fighter.

Alvarez has a stellar resume as of 2018. He has fought 8 times, but also in different divisions. He had 3rd round KO of Rocky Fielding, then beat Daniel Jacobs at the middleweight level, from UD, and I’ll say he was more impressive in his win than Golovkin. After that, he defeated a fading but still dangerous Kovalev by KO in 11u round. A little about this fight – Kovalev was at the bottom of his career, yes, but what kept him cautious and honest during the fight was Alvarez’s speed and edge, the same way Golovkin was cautious and in both matches.

After that, Alvarez made a clean sweep of the super middleweight titles, I believe the first time that’s ever happened, and really found his rhythm at that weight. In succession, he beat Callum Smith with UD, Billy Joe Saunders with RTD in 9.u round and Caleb Plant by TKO in the 11thu round, with only a short three-round bout with Avni Yildrim, which he won by KO. But more importantly, all three of these fighters were undefeated champions and Alvarez beat them all!! That’s a pretty remarkable feat – to have to adapt stylistically to all these different fighters and excel at all of them – that’s far more impressive than anything Golovkin has done since 2018, and Alvarez has improved and learned something new every time. one of these matches.

Alvarez learned his limits against Dmitry Bivol, a tough and skilled light heavyweight champion in his prime who won a UD against Alvarez earlier this year. However, it says a lot for Alvarez that he took the fight on the advice of his coaches – and I still think he can beat everyone except maybe a Top 5 heavyweight like Bivol, Beterbiev, Joe Smith or Anthony Yarde. Hopefully with the loss, he won’t try to move up to cruiserweight. I still think he will lose every rematch to Dmitry Bivol and just need to move on.

There are two scenarios for how this match will go: predictable and exciting. The predictable result, announced by Paulie Malignaggi, is that Team Alvarez successfully waited for Golovkin to age, and that Alvarez has greatly improved since then, while Golovkin has declined with age or at best stagnated. Two variations of this thesis are that Alvarez is the better boxer now and will win a clear and decisive unanimous decision, or that it is very likely that Alvarez will knock out Golovkin due to the difference in skill and experience.

Instead, Marquez’s position is that there is a strong analogy between the trilogy of Alvarez and Golovkin and the four fights between Pacquiao and Marquez, where Marquez was denied even one victory in several close and hard-fought contests.

So, which thesis is correct? Both have problems. The problem with Malignaggi’s thesis is that while it’s true that Alvarez predates Golovkin chronologically, he’s had the toughest fights and has accumulated more wear and tear since then. In addition, Alvarez is now 32 years old and therefore has been a professional boxer for more than half of his life. And the KO version of this thesis ignores the chin and defense of Golovkin, who has never been knocked out or even knocked out in any boxing contest, professional or amateur, and apparently even in sparring.

The problem with the Marquez thesis is that Pacquaio was an aggressive and sometimes reckless fighter who constantly moved forward and that Marques was a defensively oriented fighter with a higher boxing IQ. Instead, it’s Golovkin who comes forward, and Alvarez is a defensive-minded fighter with a higher boxing IQ. So, if anything, this should favor Alvarez given that he is the counterpuncher.

The previous two games are a matter of historical record and fans are free to go back and score them again at any time. But for this fight, Alvarez is the more improved and smarter fighter and despite Golovkin’s best efforts, his reserve and defensive skills will only see him engage in effective as opposed to reckless aggression and Alvarez will win with his skillful combinations and effective defense.